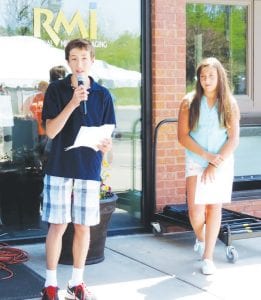 Pietro Pellerito, 15, describes his fight against cancer when he was only ten years old, during the Relay Recesss children’s event on Sunday at RMI on Lennon Road. His sister, Mattea, right, talked about the emotional toll his diagnosis took on their family.

FLINT TWP. — Bad headaches were waking tenyear old Pietro Pellerito from his sleep when his mother Miriam, a radiologist at Regional Medical Imaging (RMI), decided to take him to work for MRI testing. His brain tumor diagnosis began an arduous fight for survival for the Washington Township family.

“I was shocked by the discovery that I had cancer … even more shocking was that there was no easy solution like a pill I could take to cure it.” said Pietro, now 15, who recounted his ordeal as the guest speaker Sunday at Relay Recess, an annual event for children to raise awareness and funds for cancer research, hosted by RMI, 3345 Lennon Road.

Pietro immediately underwent brain surgery to remove the tumor, which he describes as the easy part. The hard part that followed was six weeks of radiation the left him with skin burns and 19 months of chemotherapy that caused hair and weight loss and such severe nausea that even the smell of the hospital when he walked in the door made him sick.

“Thankfully, I am one of the lucky ones,’’ said Pietro, now fully recovered four years post treatment. “Currently one in five children die from cancer and one in three adults don’t make it past five years of their diagnosed state,” he said.

Pietro thanked those in attendance for joining the fight to raise money for cancer research in hopes that someday everyone will become a cancer survivor.

Diane LaBree and Meleanie Zaucha, who both work at RMI, organized the Relay Recess event. Their team, On Angel Wings, will also be walking in the Flushing- Swartz Creek Relay for Life event June13-14 at Flushing’s Riverview Park, 203 S. Cherry Street.

LaBree is this year’s chairperson for the 24-hour event that begins at 2 p.m. on Friday and concludes at 2 p.m. the following day. It will include a Luminaria Ceremony held in memory of people lost to cancer and to support those currently battling the disease.

“They do a 24-hour event because their slogan is “cancer never sleeps,’’ LaBree said.