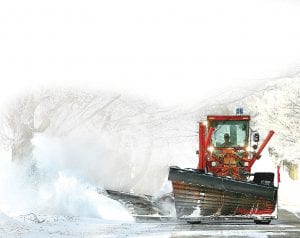 In December 2010, the road commission and Flint Township contracted with Curbco Inc. of Swartz Creek for a three-year pilot program, expiring in May 2013 but subject to a 30-day written notice by any party to terminate earlier.

The agreement called for Curbco to begin plowing within 24 hours of a snowfall of 5 inches or more, at the township’s request, starting with industrial parks and then moving on to residential subdivisions. A heavy snowfall in early February 2011 triggered the township’s first call for Curbco’s services which later rated a favorable response.

The agreement budgeted $55,000 for the service per year with the township’s share paid from its Road Millage Fund and the road commission reimbursing the township for 50 percent of the total cost. If winters are mild, the township is allowed to use unspent funds for street services such as road or catch basin repairs.

The program’s objective to improve the safety and welfare of township residents by providing faster access to county primary and state trunk lines, according to John Daly, Road Commission manager-director.

“The advantage to township motorists is that we will be able to cut the time to clear their entire road system by about 12 hours, getting them out of their residential streets and to the main roads faster,” Daly said in a press release. “We used it a couple of times in Flint Township last year and it worked really well. I would expect that with the experience we gained there, it will be even more effective this time around.”

Under the expanded pilot project the Road Commission maintenance director will assess road conditions and make the decision when to call for supplemental services. The project will run until May of 2012 with possible extension to May of 2013.

Daly also reminds residents that they can help the Road Commission be more responsive — and save themselves a mess at the same time, by keeping the road clear during heavy snow events.

“Every year when snow events coincide with local trash collection days we have instances where snow plows — ours as well as those of private companies — hit trash barrels or bags that residents have placed into the road for collection,’’ he said. “When these get snow covered they become invisible to the drivers who then “deposit” the trash back into the yard. We would ask residents to help us avoid this mess, which nobody enjoys, by placing trash well off the road during snow events, or even hold onto it until the next collection cycle, if possible.”