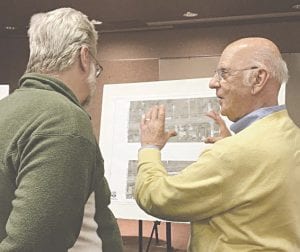 FLINT TWP. — Only a handful of people attended the public meeting Dec. 12 on the proposed resurfacing of Van Slyke Road from a four-lane to a three-lane road.

The Genesee County Road Commission is gathering public input on the plan to resurface Van Slyke Road from a four-lane to a three-lane roadway from Maple Avenue to Bristol Road. The reconfigured lane set-up would be one travel lane in each direction, with a shared left-turn center lane and a sixfoot wide paved shoulder on each side of the roadway.

GCRC engineers Richard Hill and Bonnie Wood shared information at the public meeting. Hill said the resurfacing of the road will take place next summer, but they are still gathering input on the “road diet,” the term for reducing the number of lanes of traffic.

Hill said the pace rating, which rates the condition of roadways, for Van SlykeRoadisa3outof10.

“That’s high-end poor,” Hill explained. “A rating of 10 is brand new. After one summer, it’s a 9, and Van Slyke is currently at a 3. We know we’re resurfacing it, so why not go ahead at the same time and make it safer as well.”

“The road diet would eliminate about 50 percent of those head-on and side-swipe crashes,” Wood said. “It will also improve the angle-type crashes.”

Hill added that the road has less than 10,000 vehicles a day traveling on it, which also makes it a good candidate for the road diet.

Hill said the $1.4 million project will be done from mid-June after school is out for the summer through the end of August and completed before school starts again after Labor Day. Work will include 2-3 inches of cold milling and paving and catch basin repairs. At least one lane of traffic each way will be maintained throughout the project, and access to driveways will be maintained at all times.

“The only time you might not have access to driveways would be if you’re having curb and gutter work,” Hill said. “In that case, the contractor will give you three days notice, and hopefully you can work out with neighbors if you can park there during the day.”

Bids are expected to be let in March, so there is still time for public comment. To comment, call the GCRC at 810-767-4920 or online at gcrc.org.