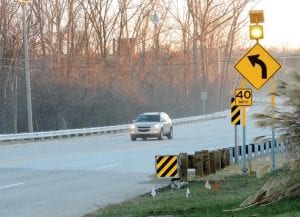 Yippee. The three-month detour has ended and Ballenger Highway with connections to 12th Street, Van Slyke Road and other points south has reopened to traffic.

That section of road has been closed since August 25 for a total replacement of the deteriorating bridge. The road was originally slated to reopen to traffic on November 20 but was pushed back to December 5.

A November 2012 inspection rated the bridge structurally deficient. It was built in 1928 and reconstructed in 1967.