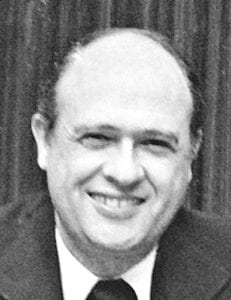 ROBERT CHARLES AMBLE, SR., 87, of Davison, MI, passed away Wednesday, January 20, 2021 at Ascension Genesys Hospital. Cremation has taken place. No services will be held at this time. In lieu of flowers, memorial contributions may be considered to the Leukemia and Lymphoma Society in honor of his son, Bob or to the Susan G. Komen Foundation in memory of his daughter, Karen.

Robert was born in Detroit, MI on December 28, 1933 son of the late Charles and Marion Amble. He married Barbara Walker on July 10, 1953 in Harrison, MI. Bob was an avid Central Michigan University (CMU) and Michigan State University (MSU) fan, where he earned his undergraduate and doctoral degrees. He was a passionate educator, and coached basketball and baseball for years in Houghton Lake and Davison Schools. Bob was well-remembered and loved by his athletes, who he regularly referred to as his “boys.” He also served as the superintendent of Davison Community Schools for 21 years, loved golf, and never missed a Tigers game in his 87 years. Opening Day on November 15 was his favorite “holiday,” as he was an avid sportsman and enjoyed hunting with his son and family friends.

Robert is survived by his beloved wife of 67 years, who he met in first grade in Harrison, MI, Barbara; sister, Katie Dobie of Sugar Hill, New Hampshire; the loving father of Jon Amble of Six Lakes, MI and daughter-in-law, Kim Amble of Davison, MI. He also leaves behind nine grandchildren, 15 great-grandchildren and loving family and friends. He was preceded in death by his infant son, Duane; daughter, Karen Amble Leffler (58) and son, Robert Amble Jr. (50).

Please share your sympathy, memories, or thoughts with the family online at www.allenfuneralhomeinc.com