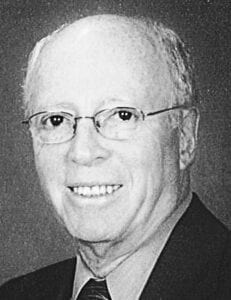 ROBERT LEWIS HILLMAN, 82, of Davison, passed away peacefully at home, surrounded by his family on Sunday, August 30, 2020.

Robert was born in Freemont Township, on October 24, 1937, son of the late Howard and Helena (Saunders) Hillman. He married Janet Darlene Craig on June 28, 1958 in Yale. Robert graduated from Croswell High School and The University of Michigan. He was a highly talented and respected manufacturing engineer, retiring from GM after a distinguished career of 38 years. Robert subsequently established an engineering consulting firm, where he was instrumental in designing the patented Hensley hitch sway control device. He also held chair on the Hensley Mfg. board of directors. Bob enjoyed farming, traveling, boating, camping, fishing, antique vehicles, and mentoring. He was a devout Christian in his stewardship at the Davison Church of Christ. Above all, Bob enjoyed spending time with his family and took great pride in their accomplishments. He stressed with them the importance of education and used every opportunity to teach a strong work ethic and always doing your best. Bob was a “super fan” at all their activities. He had endless projects with his grandchildren that brought him joy, from hatching chickens, building a motorized bike from scrap parts, rebuilding engines, teaching them how to use a lathe or drive a tractor, making up bedtime stories, to watching Little Bear on TV at lunchtime. At the end of every day, there was always a big bowl of ice cream for everyone.

In addition to his parents, he was preceded in death by son-in-law, Robert G. Kechner; two siblings, James Hillman and Evelyn Lohr; brother-in-law, Lloyd Lohr; and sister-in-law, Bonnie Hillman.

In lieu of flowers, contributions may be made to the Michigan Parkinson’s Foundation, in Robert’s memory.

A Private Funeral Service will be held. Robert will be laid to rest in Dawn Memorial Cemetery.