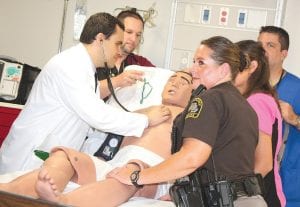 Staff and first responders work on “Mac McLaren” during a training session at McLaren Regional Medical Center in Flint.

FLINT — A new patient with a host of medical problems has been living at McLaren Regional Medical Center for the past month and the staff intend to keep him there as a permanent patient.

Mac McLaren suffers heart attacks. He has allergic reactions, asthma attacks, convulsions — and he even changes gender depending on the day.

Mac is a mathematically engineered human model robot that is called “the smartest dummy you’ll ever meet.”

He can blink, vomit, bleed, show signs of a drug overdose, cry and even die.

On Sept. 8 a multi-disciplined crisis team with no previous knowledge of Mac’s medical history went into the operating room and helped him recover from an asthma attack.

The real-life circumstances he brings medical staff and students elicit very spoton reactions, including concern, sweat on the brow and in some past instances, tears.

“They know it’s simulation but after one minute it becomes real,” said Laurie Prochazka, McLaren spokeswoman.

Instructor Don Adams said, ” What this allows us to do is they become involved and they get engaged. It becomes very real and develops feelings and so when they make a mistake, or they do well they either feel really good or really bad.”

According to Adams, earlier in the week a paramedic said, “I’ve killed him three times, but I won’t kill your grandmother.”

Essentially this is what Adams hopes Mac does for staff and students. He wants them to practice and prepare to save real lives.

Although the robot is most utilized by medical students, “employees can even bop down for a 20 minute simulation and go back to work,” said Adams.

Genesee County Sheriff ‘s paramedic Jamie Adams was in the room working as part of the crisis team. Not knowing what to bring with her, she brought her usual equipment and put herself in the scenario as she would with a real medical situation.

“It gets your adrenaline pumping,” she said.

“Some patients in real life don’t have family to relay medical history,” she said. Mac enables students and staff to react without much or any previous knowledge of an individual’s health records.

Programmers working in an adjacent control room generate Mac’s chosen illness and also his voice with two computers, three television screens, and recording equipment. They can use programmed voices or their own to create a new and unpredictable learning experience each time.

“I can change everything, I can change his blood pressure, his heart rate, I can make him blink, we can put him into convulsions,“ said the programmer, John Dugay.

After Mac’s care is complete, students go into a room next door and watch a DVR of their care experience. It is there that they get to critique themselves and praise their fellow team members.

McLaren Medical Center is looking to the future and Mac is one of the many ways they are increasing patient care. As the only hospital in the area with this technology, they hope to build confidence in their staff, provide accelerated learning, and most importantly save lives.

In regards to care, Debra Main of McLaren said, “This is a huge benefit to patients.”