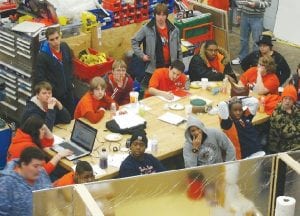 Members of the Carman- Ainsworth High School Robotics Team 314 work on last season’s game for the FRC challenge with FIRST.

FLINT TWP.
— Since beginning its competition season in 1999, the Carman-Ainsworth High School Robotics Team 314 and their robot Big MO have immersed themselves in the world of robotics.

The team, which meets in the high school wood shop, has garnered many accomplishments since its inception by competing with Big MO in FRC, which has been dubbed a “varsity sport for the mind.” In 2004, the team was the winner of the Southern California Regional and a National Qualifier at the tournament held in Atlanta, Georgia. In 2010, the team made it to the semi-finals at the Cass Tech District Event.

“We were picked for the elimination matches, made it through the semi-finals and were taken out,” Crain.

At the event, Team 314 was the runner-up for the Underwriters’ Laboratories Industrial Safety Award. The team also has been multiple finalists and semi-finalists at multiple regionals throughout the country since 1999 said Crain.

But while designing, building and playing a game with a robot is fun, Crain said the program gives kids a chance to experience something new. “I call it Try It Before You Buy It,” Crain said. The robotics program covers six to eight different career fields, giving students experience in animation; designing and maintaining a website; all aspects of business, including marketing, advertising, public relations and fundraising; all aspects of engineering, including mechanical and electrical; and welding.

“Team members have the opportunity to apply to more than $14 million in college scholarships from all over the nation,” Crain said.

Along with competing and winning awards, Team 314 participates in a number of community events during its offseason by performing demos at various events, including the Crim Kids Classic, Sloan Auto Fair, Back to the Bricks and the Flint Township Police Department’s National Night Out.

“Last year, the team was instrumental and active with Carman-Ainsworth winning the ABC12 Spirit Cup,” Crain said. Through pressing by her son, Crain said she started doing the Spirit Cup at the high school but did not want it to be solely a high school endeavor. From the high school, it became a district initiative and then a community-wide initiative she said. The district, as a whole, raised 149,210 pounds of food last year for the ABC12 Spirit Cup/Food Bank of Eastern Michigan Food Drive. Crain was honored by the Carman-Ainsworth Board of Education at its Oct. 19 meeting for her efforts with the drive.

Crain said the team also was recently honored at Kettering University for raising $250 dollars in 24 hours during the university’s food drive. The amount raised equaled 1,845 pounds of food. While Crain gets credit for the team’s fundraising efforts, she does not do it for herself.

“I do it to inspire others to go out and carry on the good, to pass it forward,” she said.

The CAHS Robotics Team includes approximately 15 high school students in grades 9-12. People can join the team year-round, and anyone interested in joining the team can contact Crain at 810-591-5460 or stop by the wood shop room at the high school. “We accept everybody, and we are a family,” she said.

The tournaments, which will be held at Carman-Ainsworth Middle School, showcase students ages 9-14 displaying their talents in robot design, build and programming, along with innovative solutions, research, outreach, robot performance and other areas. This year’s theme is bioengineering. Opening ceremonies for the tournament begin at 8:30 a.m. and admission is free to the public.

Once LEGO season ends, Crain said the new FRC season begins on Jan. 8, 2011 when the team will receive its new game for the season.

“Once we get the game, we’ll come back to the shop and brainstorm on what to do and decide to build it,” she said. From that point, the team has six weeks to design, build and program the robot to play the new game. The team also has five weeks to create a 30-second animation piece and build/design a website and maintain it for the team.

The upcoming year also marks Crain’s 12th season with the team. “I love the program,” she said.

For more information on the team, visit www.314megatronoracles.com
or email Bigmo314@carman.k12.mi.us.