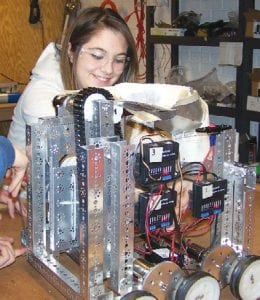 Their latest win last month at the FIRST Tech Challenge regional tournament in Wisconsin qualified them to compete in the World Championship FTC tournament April 27-30 in St. Louis, Missouri. This division is for students in grades 9 through 12, ages 14 to 18.

Many members of Da Peeps have been together since fourth grade when they started under the guidance of their teacher and coach Leanne Welch, a teacher at Rankin Elementary.

“It is nice that kids can get recognition for an academic team,” Welch said. “It’s good that it coordinates with their future jobs (aspirations).’’

Da Peep meetings are held on weekends for this group of dedicated young people who are busy doing other things including sports during the week, Welch said.

Last Saturday, three of them spent about eight hours rebuilding their 18-by- 18-inch robot dubbed Chippopotamus. Unhappy with some performance issues in Wisconsin, the team decided to totally rebuild their robot. The new and improved Chippopotamus has features that allow it to better perform tasks in competition.

Da Peeps meet in the Fenton basement of the grandparents of a team member. There they have access to a workshop full of tools. But it also where they have built an arena like the one they actually compete in. It allows them to put Chippopotamus through its performance paces which includes picking up and moving batons, balancing on a board and driving over a ledge.

Da Peeps are getting ready for their next competition February 26 in Kentucky. It will give the group an opportunity to practice competitively before their championship try in St. Louis, Welch said.

At last Sunday’s meeting, the entire team was hard at work on different projects. One group worked on rebuilding Chippopotamus which is made of aluminum and plastic.

Another worked on writing the computer program that sends the robot its orders including being to perform without assistance for the first 40 seconds of competition.

Still another group worked on a computer to create a Computer-Assisted- Design of the robot.

“We want to be able to have our whole robot done on CAD,’’ said Sherrer, 14, a student at CAHS, who added that it will help them better explain the robot to competition judges.

A fourth group worked on building the team’s new Web site to help promote their activities.

Team members emphasized that not only math and science skills are needed but they also have to be good at public speaking and writing to communicate with competition judges.