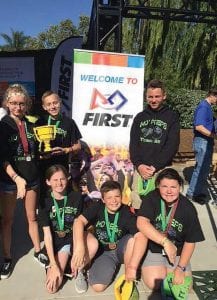 Mo Peeps enjoy a visit to Lego Land in California during an international robotics competition.

At an FLL international robotics tournament May 10-22 in California, the team won first place for their research project about the environmental hazard of Styrofoam food trays.

MO’ Peeps earned a trip to that invitation-only tournament by finishing third in the state FLL robotics competition.

Trash Trek was the theme for this year’s robotic competition. In a required research project, each team had to identify a real world problem, create an innovative solution and share their research and solution with others.

Mo Peeps scored first place in research for their project to replace Styrofoam trays (right) with compostable ones.

Mo Peeps did extensive research to demonstrate the environmental hazards of Styrofoam which scientists estimate takes 1,000 years to decompose in landfills. The students met with state and school officials in their ongoing quest to replace Styrofoam trays in their school cafeterias with compostable ones. The compiled their findings into a skit that was presented at the California competition.