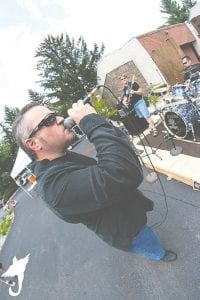 “Growing up, I hated fixing bicycles for the family business but that was how I earned my allowance. It drives my dad crazy to hear how many we have given away for free,” says Tony Tucker with a laugh. The Restaurateur, community leader, and all around good guy is referring to the fourth official Krystal Jo’s Diner Annual Bike Give Away slated for June Ninth at Neithercut Elementary and Holmes Stem Academy. The goal this year is to give away a whopping one thousand bicycles to Flint area kids who need one. The event has turned into a great summer highlight in Flint with a party atmosphere of free food, entertainment, prizes, and of course bikes for the kids on a first-come, first-serve basis.

If you want to get involved, drop off an old bike or bicycle parts in any condition to Krystal Jo’s Diner at 3616 Fenton Rd. in Flint. And you might as well place an order at the best breakfast and lunch counter in Flint while you are there. The ever-present smell of cooking bacon will leave you saddened and unfulfilled if you don’t.

The event has grown exponentially, fueled by a communal desire to get kids active, engaged, and sharing in the pure joy and freedom that a bicycle has represented to every generation of children since the invention of the bicycle.

There were 70 bikes given away at the inaugural event, 168 at the second, and 577 last year making it one of the fastest growing, fundamentally cool and organically home-grown charitable events in Genesee County.

Hundreds of people have contributed to the effort, from local businesses donating storage space and resources to friends and customers donating old bikes and parts or just sharing information on social media. Special “Above and beyond the call” mention goes to The Johnny Burke Foundation and Rawlan Lillard, Community School Director of Neithercut Elementary School.

I have the pleasure of emceeing the upcoming fund raising concert at The Machine Shop on March 31. It is a collaborative effort spearheaded by 711 Entertainment and featuring the donated talents of Mid-Michigan Rockers: Play to the Gallery, Todd Gilbert, E.Z. Duhzit and The Soul Jar, and Crimson Highway. Doors open at 7 p.m. and admission is a minimum donation $5. There will be a bake sale and door prizes will be raffled off throughout the night. Bikes and parts will also be accepted. Tony and I met about 10 years ago and we instantly bonded over a shared insanity that was evident in our respective choices to open businesses in the Genesee County of the latter 2000’s. I have visited his secret compound and witnessed the staggering mounds of bicycles in various states of repair that his very sweet and understanding wife and Diner’s namesake, Krystal, accepts and encourages; truly, charity begins at home. If all goes as planned this will be the last year that you hear the name Krystal Jo’s Bike Give Away associated with the event. Tony is a volunteer mentor at The Genesee Valley Regional Center (GVRC) and he is taking steps to found an official non-profit charity named Another Chance Foundation to be located in Flint with the aim of teaching the at-risk youths of the GVRC to repair bicycles, work with their hands, and perform community service while doing something worthwhile.

Find out more about the events and the people involved by visiting @krystaljosdiner and @711EntertainmentFlint.