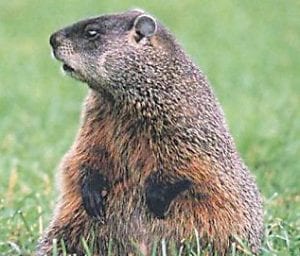 Groundhogs have been a measuring stick for winter for 125 years.

NATIONWIDE — On Feb. 2, the second most popular rodent—behind Mickey Mouse of course— will not only have haters of winter crossing their fingers, but will emerge from his burrow at Gobbler’s Knob in Punxsutawney, Penn. for the 125th year, or his quasquicentennial.

Punxsutawney Phil, the world’s most famous ground hog, or woodchuck if you prefer, will be ripped from his winter hibernation into the glaring media spotlight to answer the age-old question: Are we done with winter?

Phil and his ancestors are the largest sciurid (squirrel family) and is sometimes referred to as a ground squirrel. Groundhogs measure 16-20 inches in length and weigh 9-31 lbs. depending on their regional home, predators and food stores. The adept diggers are beloved by those following the Groundhogs day folklore and reviled by gardeners, farmers and cattle and horse breeders. They can dig very large burrows with their powerful, yet short limbs and thick, curved claws.

The lifespan of free ranging ground hogs is up to three years, but can last as long as six years in the wild. Captive groundhogs have been documented to live 22 years because they don’t have to fend for food or fend off predators like coyotes, wolves, fox and bobcats. Large hawks, owls and dogs often take out many ground hogs each year. Snakes like to feast on baby groundhogs, surprising them in their burrows.

Groundhogs hibernate each year, typically between October and March, so its no wonder Punxsutawney Phil has a bewildered look on his face when snatched from his popular stump burrow each Feb. 2. And, with all those glaring media lights, it’s no wonder he sees his shadow more often than not.

The first Groundhogs Day event took place at Gobbler’s Knob in 1887 and today the crowds reach upwards of 30,000 noshing on chocolate look-alikes of the rodent, hot beverages and other snacks. The custom reportedly dates back to the early days of Christianity in Europe and came from the winter festival called Candleman’s Day, a day for clergy to bless and distribute candles. Folklore told that on clear skies on Candleman’s Day a hedgehog would cast its shadow, meaning a longer winter. Germans ancestors in Pennsylvania carried through with their tradition of a hedgehog casting a shadow to predict the length of winter, noting its resemblance to the American groundhog.

To follow Punxsutawney Phil’s schedule of events for Feb. 2 or to learn more about how he has made history marking world events such as the 1981 Iran hostages, his 1986 visit to see President Reagan and his penchant for following the Pittsburgh Steelers, log on to www.groundhog.org