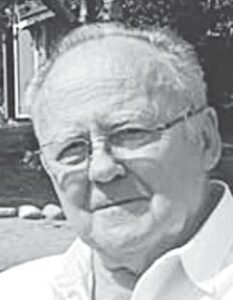 RONALD LEE ALLES, 83, passed away peacefully with family on Sunday, September 19, 2021 after a 2 year battle with throat cancer. He was born on June 17, 1938 in Flint, Michigan to Dorothy (Bigelow) and Arnold Alles. He leaves behind his wife of 62 years, Effie; his daughter, Kay Rouzer and son-in-law Kyle; his daughter, Tina Bright, and a son Jay Lee, who preceded him in death in 1959. He also leaves behind a grandson, Tyler Barron and his partner Liam Copeland; his grandson, Justin Bright and a happy little great-grandson, Mason Bright. He will miss his beloved cat Delilah and his grand pups Lily, Carmen and Riley. He is preceded in death by his sisters, Shirley, Carol and brother, Jerry.

If you knew Ron, you know that he could fix anything, make anything, do anything and you heard him often say, “that’s no problem”. He touched so many people with his talents. If you were lucky, you enjoyed his famous hot German spaghetti. He loved eating, playing cards (especially hand-knee-and-foot), anything music related, golfing, bowling and enjoyed playing the bagpipes, clogging and line dancing back in the day.

If you were one of his daughters, he would slip you a $20 when mom wasn’t looking. He dropped everything to run to your rescue even when you lived near or far. If you even hinted that you were cold, he would sneak into the other room and warm up a blanket in the dryer for you. He followed you around every summer for years watching you march in drum corps and marching band, walked you down the aisle with pride, and his handywork is all around you.

If you were one of his grandsons, he shared his talents and set you up with your toolbox of fix-it knowledge. You had a shared love of drum corps and motor homes or dirt bikes and guitars. His sweet great-grandson Mason brought him so much joy. Any chance he had to spend time with you, he would.

Ron served in the National Guard, then worked 10 years at McDonald Dairy as a mechanic. Then, he launched his 40 year career with General Motors as a mechanic, then ventured into Opel mechanics before moving on to supervisor at Buick Factory 17 Garage in Flint and Lake Orion Assembly, before retiring in 2005.

Ron served as president of the Elf Khurafeh Shrine Highlander Bagpipe Band and was former owner-operator of Flushing One Hour Cleaners and Glen Gables Wedding Chapel. He was also an expert in handmade, motorized Christmas displays.

Ron had a life well lived and his family and friends will miss him dearly, until we meet again.