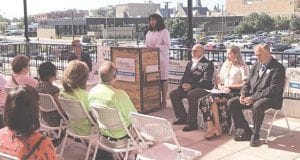 Speaker Dr. Traci Dantzler, dentist and past president of the Genesee District Dental Society, talked about the large amount of money spent on dental emergencies which can be a result of patients not having access to basic preventative healthcare and dental plans. Photo provided.

GENESEE COUNTY — This November, Genesee County residents are urged to vote a health care millage which will be called the “Genesee County Health Care Services Millage Renewal.” If the millage renewal passes, the Genesee Health Plan will be able to provide its coverage for an additional seven years. The millage would cost the average homeowner about $50 per year.

“It’s not a new tax but a renewal,” said Jim Milanowski, president and CEO of Genesee Health Plan.

Genesee Health Plan officially announced the possibility of the renewal of the healthcare services millage on Sept. 5 on the roof of the Flint Farmer’s Market.

Milanowki called the health care services millage officially passed in 2006 a “leap of faith” made by the community.

“It really was unheard of that a community would come together to vote in support a property tax millage to help support the care and medical help for the uninsured,” he said.

The millage was previously renewed in 2012.

Seniors and veterans typically need more work and they are typically the demographic that’s overlooked, according to Dr. Traci Dantzler.

“Tens of millions of dollars are spent treating people who go to the emergency room for dental emergencies,” Dantzler said. “Medical doctors are trained to say they can only give antibiotics and pain medication. But, the source of that pain has not been treated.”

Dantzler said a healthy mouth equals a healthy body and vice versa, and said lives have been saved through people being able to have basic medical procedures with the plan. She also said a person’s lifespan is increased by 10 years by having access to regular care.

Veteran Dennis Cramer is able to receive routine dental care through the plan. He also said his 88-year-old mother’s overall cognitive ability had improved by 25-30 percent by two extractions five months ago after he enrolled her in the plan.

Estephanie Ward, a student at the University of Michigan-Flint who spoke at the recent rally and has been diaganosed with a generalized anxiety disorder, is able to pay for her necessary monthly doctor’s visits and monthly prescriptions through the Genesee Health Plan.

Flint and Genesee Chamber of Commerce Director of Member Services Steven Elkins also endorsed the plan on behalf of the chamber.

Milanowski assured the audience 100 percent of the millage funds would go towards health care.