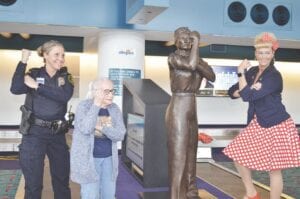 Phyllis Jones (front left) poses with the new Rosie the Riveter statue. To the right is Amber Taylor, who served as the statue’s model. Photo by Ben Gagnon

FLINT TWP. — An iconic symbol for working women and the American auto industry has found a new home at Flint Bishop International Airport.

Organizers with Back to the Bricks and the Flint Women’s Forum unveiled the Rosie the Riveter statue at a ceremony held on Jan. 29. Rosie, the first female statue to join the Automobile Heritage collection, is now displayed in Flint Bishop Airport’s baggage claim area alongside statues of auto industry pioneers Walter P. Chrysler and Charles Nash.

Amber Taylor, Executive Director for Back to the Bricks, said that the statue recognizes the impact of women who worked in local auto plants during World War II, while also honoring Flint’s important role as a wartime manufacturing hub.

“It’s about giving them the honor and joy of what they did for us during World War II,” Taylor said. “Celebrating the history is so important in our community, and I’m honored to be a part of it.”

Taylor, who’s also President of the Flint Women’s Forum, served as the official model for the statue and portrayed Rosie the Riveter in presentations to over 30 different groups and organizations as part of a fundraising push to create a statue for Rosie.

Rosie the Riveter’s origins date back to World War II when millions of men were being drafted into the military and leaving behind a major labor shortage in the United States. To strengthen the workforce, the Westinghouse War Production Coordinating Committee created a campaign to recruit women into the defense industries.

The star of that campaign was a character named Rosie the Riveter—a strong, independent female worker who appeared in print ads and posters across the country. Some historians believe that Rosie was inspired by Rose Will Monroe, who worked as a riveter at the Willow Run Aircraft Factory in Ypsilanti.

Although the heavy manufacturing industry had been an uncharted territory for women, many rose to the challenge to help build bombers and tanks—including “Rosies” who worked in Flint’s auto factories.

“If women hadn’t stepped into the breach and did what they did to build the arsenal of democracy…we wouldn’t have won the war and preserved our way of life,” said Gary Fisher, Vice President of the Genesee County Historical Society. “The Rosie the Riveters did a lot more than just show up and do a job. The work that they did needs to be honored and respected for the magnitude that it had.”

One such real life “Rosie” was Phyllis Jones, who helped to build B-17 bombers in a Detroit factory from 1943 to 1945. Jones, 98, was in attendance for the ceremony at Flint Bishop Airport and even got to pose for pictures with the statue.

“I’m honored to be here to see this,” she said about the statue presentation. “It’s been a long time coming.”

The statue itself, which stands five-foot-four and weighs 500 pounds, was sculpted out of clay by Flint native Joe Rundell and later bronzed.

Altogether, the Flint Women’s Forum and Back to the Bricks raised $40,000 for the Rosie statue project. The Flint Women’s Forum organized a 5k Walk/ Run this past June to raise over $15,000 towards the statue’s overall goal, while Shea Automotive Group and 103.9 the Fox hosted a Women That Rock Radiothon in December to help push the fundraising efforts over the finish line.