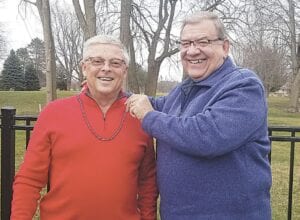 FLUSHING — Rotary Club of Flushing member Tim Glavin has received the 2021 Tommy Award for displaying exemplary service to the community and to his Rotary chapter.

Glavin, a charter member of the club who participated in its formation in April 1992, received his Tommy during a virtual Rotary Club of Flushing meeting on March 25. Fellow Rotary members describe Glavin as a dedicated Rotarian since the club’s chartering, assisting in every community service effort and ensuring that many functions of the regular Rotary meetings go smoothly

Glavin, who has primarily served as Sergeant-at-Arms for the club, quietly and consistently serves the club by arriving early every week, setting up for the weekly meeting, arranging for attendance, collecting 50/50 raffle funds and managing member name tags. He is also responsible for ensuring all members are wearing their Rotary pins and will fine them if they are not, which is a Rotary tradition.

Glavin also collects “Happy Bucks” from members during the meeting when they share a positive event in their lives.

“It is not always those who are front and center who should be recognized, but often those who just do what needs to be done and make it look effortless and seamless in a consistent and dependable manner,” said Flushing Rotary member Dr. John Cote. “Tim is a master of ensuring things are always taken care of and his dependability and dedication to his role are without question.”

Rotary has been a family affair for the Glavins, as their son Tom has also helped at Rotary fundraisers by wearing the duck costume during the annual Duckie Race fundraisers.

The Thomas J. McNally Memorial Award, named after former Flushing Rotarian Thomas McNally Jr. (who is not deceased, but rather the first recipient of the award), was first presented in 1995. The award was the brainchild of former member Gerald Knight, who wanted to establish an award within the Rotary Club of Flushing to recognize a member who exhibited exemplary service to the club. Because the Flushing Rotary chapter was just three-years-old at the time, it did not have sufficient funds to award a Paul Harris Fellow, one of Rotary International’s highest awards given to members.

The Tommy Award is traditionally awarded on the Thursday preceding St. Patrick’s Day each year (this year’s award was delayed because of COVID) and recognizes a member of the Rotary Club of Flushing who has exhibited outstanding service to the club in the preceding year.

The award is represented by a necklace made of emerald green beads that is referred to within the Rotary Club as “the precious gems.” The recipient is expected to keep these “gems” safe, to wear them periodically at club meetings and to plan and coordinate their awarding to a successor each year, in cooperation with prior Tommy Award winners in a secret planning session known as the “Tomclave.” Only prior award recipients can participate in the selection of the recipient each year.