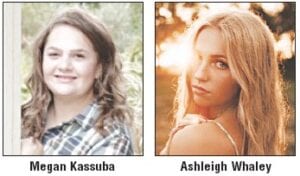 FLUSHING — The Rotary Club of Flushing has awarded scholarships to two Flushing High School students for going above and beyond with acts of community service.

Kassuba, who graduated with a 3.69 GPA, plans to attend Central Michigan University this fall to study environmental science. Her goal is to become a park ranger and travel around the United States to all the national parks.

As a Girl Scout member, Kassuba earned the Girl Scouts Silver Award and helped younger Girl Scouts earn badges. She was also the captain of the FHS ski team for two years and the girls’ golf team captain for one year.

Whaley, who graduated with a 4.0 GPA, plans to attend Grand Valley State University and study nursing. She attended Mott Community College while in high school.

At FHS, Whaley was a four-year scholar athlete with the girls varsity soccer team and was an MVP and scholar-athlete on the girls varsity basketball team. She also tutored students in mathematics as a member of Mu Alpha Theta and volunteered to help with kindergarten classes at the Early Childhood Center, where she was a role model for younger kids.

Outside the school setting, Whaley participated in a Nazarene Church project in Arizona and helped a local church revitalize its building. She and other volunteers also passed out water to homeless people who were suffering from the extreme heat at the time.

Whaley also volunteered with the Food Bank of Eastern Michigan to organize and distribute food products; prepared food at the North Flint Soup Kitchen; volunteered with Flushing Community Church to put together Thanksgiving, Christmas and Easter gift baskets for those in need; and volunteered with youth at a Flushing soccer summer camp.

Each year, the Rotary Club of Flushing scholarships focus on service, as the Rotary motto is “Service Above Self.” The Rotary Club strives to award scholarships to students who demonstrate exemplary service above self and distinguish themselves among their peers by their service to the community. A scholarship subcommittee comprised of Rotary members and community representatives reviews student applications and makes recipient selections.

The scholarship program funds are administered by the Community Foundation of Greater Flint.