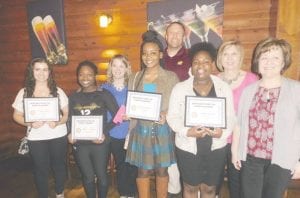 Rotary Students for the months of March and April are (L-R) Leticia Silva, Chelsea Pearson, En’Dea Haygood and Ocher Benson, all seniors, shown with C-A teachers and administrators

FLINT TWP. — Ocher Benson and Chelsea Pearson were recognized by the Genesee Valley Rotary Club as the Carman-Ainsworth High School Students of the Month for March and Leticia Silva and En’Dea Haygood was chosen for the month of April.

Ocher transferred to C-A from Flushing in September and is graduating with honors. She is a member of Chorale, a Teacher’s Assistant in Women’s Ensemble and a member of the after-school ensemble. She has studied piano at the Flint Institute of Music and also has helped with the pre-school music program at FIM as an aide. She has competed in local and national competitions for both piano and vocals and recently was awarded first place for her vocal solo in an NAACP competition.

Ocher was the lead in the high school musical “Sister Act,” playing the role of Mother Superior.

Besides outstanding academic and musical abilities, Ocher is a student leader. If a student is struggling on a choral part she willingly accepts the challenge to help them and often is able to sing everyone’s part in the choir when asked.

She has received a scholarship to Oakland University, majoring in linguistics and minoring in vocal music.

Chelsea was nominated by Anna Hunt, a teacher of Family and Consumer Science, who had Chelsea in three separate classes.

“She gives 110 percent effort into everything she does and is an excellent role model to her peers,” Hunt said. “She comes in each day with a positive attitude, ready to learn.” Chelsea has accomplished a lot during her four years at C-A. She is a member of Student Council, the National Honor Society, and Varsity Lacrosse and also serves as vice president of the African American Student Association. She is ranked in the Top 50 of her class and plans to attend the University of Michigan-Flint to pursue a degree in Business Management.

Leticia was nominated by three teachers. She is dual enrolled at UM-Flint taking anatomy and physiology, bioethics, biology and health applications. She is secretary of the Health Occupations Students of America (HOSA), a member of the National Honor Society; Empathy for All, president of Students for Christ and an honorary representative for Student Council. She played on the junior varsity softball team for three years, was a junior varsity cheerleader for two years, was on the varsity swim team for one year and is the junior varsity softball assistant coach.

Her awards and honors include Best of the Best Career Technical Education Student of the Year; member of the Honor Society at UM-flint, and Most Improved Player for Varsity Swimming. She also was recognized by the C-A School Board as a representative of CA High school.

Described as a “top-notch” student, Leticia has a 3.79 grade point average and plans to attend UM-Flint in the fall, to obtain a bachelor’s degree in nursing. En’Dea is active in Lacrosse, HOSA and the African American Student Association She is vice president of the National Honor Society and secretary of Student Council.

Among a long list of honors, she was the high school Homecoming Queen, the junior Homecoming Princess, and a finalist for the 2017 America’s Homecoming Queen- Michigan pageant. She placed third in HOSA regionals in 2015 and first in 2016. She completed the Michigan State Health Sciences Scholar Institute and is Occupational Safety and Health Administration (OSHA) trained and has CPR/AED Certification.

She has a 3.6 grade point average and plans to attend UM-Flint in the fall on a full-tuition scholarship, majoring in general biology with a pre-dental concentration, then later enroll in dental school at the UM Ann Arbor.