Rotary selects May Students of the Month 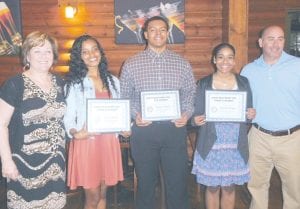 FLINT TWP. – Kendall Bragg and Jakori Miller were recognized by the Genesee Valley Rotary Club as the Carman-Ainsworth High School Students of the Month for May.

They are the final students chosen for this school year. Next month the Rotary will select one prior winning student monthly winner to receive a $1,000 scholarship to college. The scholarships will be announced and presented at its annual meeting on June 27.

She has earned several scholarships including a $16,500 Multi-cultural Advancement and $4,000 Residence Life Grant award.

She has maintained high academic honor from 2013 to present and was recognized for cheerleading by the Saginaw Valley All-Academic team and also for soccer. She also participated in band, theater, the National Honor Society, HOSA and Student Council.

Witham described her as a caring, responsible, determined, hardworking and well-rounded student.

Miller, who also was nominated by Witham, has a 3.0 g.p.a. and plans to attend Eastern Michigan University and major in sports management with a goal to become an athletic director.

He is a recipient of an Education First Scholarship that will cover all tuition.

Miller scored accolades as First Team All-League for 2016 and Best Offensive Lineman for 2016. He also received the 2015 Coaches Award for outstanding leadership and citizen on and off the field.

At its May awards recognition, the Rotary also recognized Alicia Brown as a previous month’s winner. She has a 3.836 g.p.a. and plans to attend Kettering University to become an Industrial Engineer. Her school activities include the National Honor Society, Student Leadership Team and Varsity Soccer. She was nominated by teacher Jennifer Thornton, who described her as a kind student with integrity who cares about learning and making the world around her a better place.