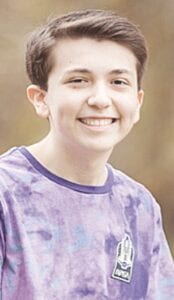 FLUSHING — Flushing High School senior Isaac Tift has been selected as the Rotary Club of Flushing’s Student of the Month for February.

Tift, a member of the National Honor Society, is carrying a 3.97 GPA in his final year at FHS. He has been recently accepted to the University of Michigan-Flint, where he plans to study early education. Tift also plans to return for his master’s degree after he begins his career in the classroom as a Pre-K/ third grade teacher.

Tift, who is an avid reader and writer, plans to write a book of his own someday. One of his current interest areas involves writing an informational text on teen issues, particularly regarding anxiety and mental health. He would also like to write children’s books in the future—a goal that aligns with his early education career path.

Tift said that his favorite FHS teacher was Mrs. Canterbury, his 10th grade English instructor. He described Canterbury—who recently retired from the district—as kind, personable, compassionate and relatable, always open to conversation and willing to help him with any problems he brought to her.

In terms of volunteerism, Tift spent much time giving back to his community. He worked at the Food Bank of Eastern Michigan, where he helped prepare and serve food, clean up and greet guests when they arrived. He also had numerous volunteer experiences as a Boy Scout, including garbage pick-up duties at the Flushing Township Nature Park and other local parks.

Tift’s $100 Rotary donation will go to the Humane Society of Genesee County.