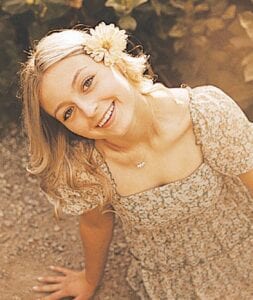 FLUSHING — Flushing senior Madalyn VanLandeghem has been selected as the Flushing Rotary Student of the Month for April.

VanLandeghem, a Rotary Interact Club member at Flushing High School, has been involved with Student Council and the Varsity Club and has been Vice President of her class since her junior year. She has also played softball for Flushing since her freshman year and will be rotating between third base to second base this season.

For college plans, Vanlandeghem said that she is trying to decide between Central Michigan University and Grand Valley State University. Whichever direction she chooses, Vanlandeghem said she will be studying biology on a pre-physician assistant track. She hopes to graduate as a physician assistant and specialize in dermatology or family medicine.

As a Rotary Interact member, VanLandeghem participates in usual Rotary Interact Club volunteer assignments such as the Flushing Candlewalk or making blankets. She has also read to students at Elms Elementary School for the Varsity Club.

This year, VanLandeghem has been regularly volunteering at Franklin Avenue Mission on the east side of Flint, where her role is usually to help assemble the to-go meals and hand them out to those in need of dinner that night.

After high school, VanLandeghem plans to see as many states as possible (Washington is at the top of her list). On a bigger scale, she and her Grandma are planning to visit New Zealand and Croatia someday.

VanLandeghem has selected Franklin Avenue Mission as the recipient for her $100 Rotary donation.