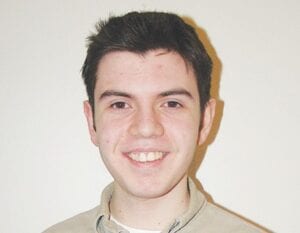 FLUSHING — Flushing High School senior Michael Benko has received Rotary Student of the Month honors for the month of December from the Rotary Club of Flushing.

Benko, who will walk with his senior class in the spring, is also currently enrolled at Flushing Raider Early College (FREC). Although the program requires him to attend high school for five years instead of four, Benko is earning numerous college credits while attending high school at a fraction of the cost of college classes. All his classes during his fifth year will be taken at Mott Community College.

Upon graduation, Benko plans to transfer his credits to Kettering University or Carnegie Mellon University to earn a degree in mechanical or aerospace engineering. Benko said that he would like to work for NASA if he goes the aerospace route or get into the automation field if he decides to earn a mechanical engineering degree.

As a student at FCS, Benko said that his two favorite teachers were Mr. Taylor and Mr. Bartlett. He said he enjoyed how they engaged with students in unconventional ways and kept their classes fun, while getting the lessons across in an easily understandable manner.

Benko also won his ninth grade spelling bee contest at Flushing and has finished near the top in every spelling bee he’s entered since fourth grade.

From seventh to eighth grade, Benko participated with the Flushing Middle School robotics program and helped to design a robot that won a competition at Milford (Aquatics ROV) and a best design award.

Benko has also been involved with the FHS theatre program, getting his start as Juror #11 in “12 Angry Jurors.” He also starred in “Ax of Murder” and “Caught in the Act” during his junior year and appeared in “Clue: On Stage” (winter 2019) and “Star Stars: The Comedy Awakens” (spring 2019).

Benko also dedicated time to volunteer with the Soup Kitchen and Catholic Charities, where he prepared food, sorted clothes and toys and helped in any capacity.

Benko’s $100 Rotary donation will go to the Old Newsboys of Flint.