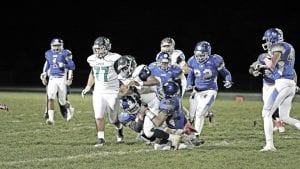 FLINT TWP. – Two fumbles in the first half by Carman-Ainsworth led to a pair of Lapeer touchdowns last Friday night as Carman-Ainsworth dropped its regular-season finale to the visiting Lightning, 24-14. The Cavaliers held Lapeer to just a field goal in the second half, but the home team was shut out after intermission and fell to 6-3 on the year.

Both teams entered last Friday with 6-2 records, but the Lightning held the upper hand most of the evening, due largely to a staunch defensive effort.

“Lapeer is an outstanding team and it was a great game,” commented Carman- Ainsworth coach Jerry Parker, whose squad went undefeated in the Saginaw Valley League-Blue and carried a fivegame win streak into Friday’s contest. “We were not able to move the football very well against them, especially on the ground.”

The Cavaliers gained 224 yards of total offense, including a mere 67 yards rushing. Meanwhile, Lapeer mustered 359 yards, passing for 83 and running for 276.

The Lightning jumped out to a 7-0 lead before two minutes had been run off the game clock as they scored on a 51-yard run on their first snap from scrimmage. The touchdown came just one play after a Cavs’ fumble handed the pigskin over to Lapeer near midfield.

Carman-Ainsworth knotted the score at 7-7, however, on its next possession, thanks to a 19-yard run by Marreon Givens. Zack Amthor’s PAT came with 7:30 still remaining in the opening quarter.

Lapeer scored twice in the second quarter, first on a 26-yard pass with 10 minutes left in the stanza and next on a 1-yard run 2:49 before intermission. The latter score came after Carman- Ainsworth’s second costly turnover of the first half.

Down 21-7, the Cavs made it close again on a 3-yard run by Quarterback Dustin Fletcher with only 28 seconds to go before the break. Amthor’s PAT boot made it 21-14.

But the second half turned into a defensive stalemate with the exception of a 33-yard field goal by Lapeer early in the fourth quarter.

Fletcher completed 15-of-30 passes for 157 yards and he ran for a team-high 36 yards on seven carries. Givens added 25 yards on the ground. Troy Brown was the leading receiver for Carman- Ainsworth with six catches for 121 yards. Marshall Brooks caught four aerials, Dewayne Gurley grabbed two passes and Lequine Jarrett, Jakobe’ Blount and Givens each had one catch.

Defensively, Jaquez Tucker and Bronson Carnes each had five solo tackles. Romeo Evans had 3.5 tackles against a Lapeer offense that did not commit a turnover.

The Cavaliers, with their six wins, have qualified for the post-season playoffs and will travel to Fenton (7-2) tomorrow for a pre-district battle against the Tigers. Kick-off is at 7 p.m.