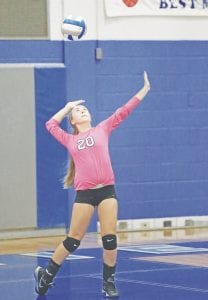 Katie Speaks gets ready to serve in a match earlier this season.

The Cavaliers went 1-2 at their own quad tournament Saturday. Morgan Sherrer had 44 digs.

Steve Braun was one of three recent inductees into the Michigan PGA Hall of Fame. An invitation only induction took place on Sunday, Oct. 23 at the Country Club of Lansing.

Braun’s impact on Michigan golf is especially evident from the two honors he has received from the Flint Junior Golf Association and the American Junior Golf Association. The FJGA named a tournament in his honor, the Steve Braun Cup, after Steve served as the executive director for 10 years (1975-1985) and dramatically helped grow the association. The AJGA’s National Service Award, the Digger Smith Award, was presented to Braun in 1992 where he worked as the tournament director. Braun received the Special Service Award when he was named to the Greater Flint Area Sports Hall of Fame in 2015. He began his PGA golf professional apprenticeship at Dunmaglas Golf Club in Charlevoix which led to the opportunity to become the head professional at Belvedere Country Club for 14 years. In 1994, Braun co-founded the Charlevoix County Junior Golf Association and currently serves as its President. After serving as the Governor of the Golf Association since 2004, he took over as its President in 2016. – L.P.