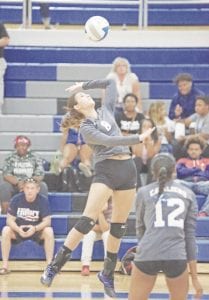 Carman-Ainsworth’s Emily Carroll goes up for a kill.

The Cavaliers hosted Lapeer in a Saginaw Valley League duel on Monday but were unable to get past the Lightning in a very close 1-0 loss. The only goal of the game was scored by Lapeer’s Graham Hemingway, assisted by Jacob Schram.

“It was a hard-fought battle tonight,” coach Barb Hurand said. “I felt Arthur Hill was solid and did a lot of things aggressively against us.

“We had to play a heads up match. Arthur Hill had some hitters who can really hit the ball hard. I thought we played well as a team and I was happy to see us rebound after losing game three to come out aggressive in game four.” – K.W.