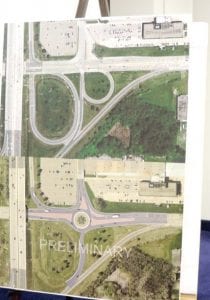 MDOT held a public meeting at Bishop Airport last week to share information a roundabout needed on Bristol Road. MDOT also provided statewide crash statistics from its campaign to reduce them using mitigations such as this proposed roundabout.

FLINT TWP. — A proposed traffic roundabout for Bristol Road near the I-75 interchange just goes to show that what goes around comes around.

It is the third proposed roundabout for Genesee County, the second in Flint Township in the past two years and possibly the first to actually be completed.

This one is being spearheaded by the Michigan Department of Transportation (MDOT) which hosted an informational meeting last week to get public input about the project.

Both residents and business owners came with questions but seemed satisfied with the answers they got, said Linda Burchell, MDOT Transportation Service Center manager.

The $2.3 million project is in the early planning stages, with design slated for 2015, aimed at installation during the 2016 construction season. It will be funded under a combination of the Traffic and Safety Division and the Congestion Mitigation and Air Quality Improvement program. 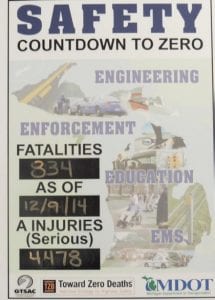 The roundabout is being proposed after several other interventions have failed to reduce accidents in the area, Burchell said.

“This is one of highest crash locations in the county,’‘ she said of the section of Bristol Road near the General Motors factory complex, just off the I-75 exit and entrance ramps. It also is the closest freeway exit to Bishop International Airport.

“We have done different mitigations trying to find solutions to concerns,’‘ Burchell said. “They have not alleviated anything.”

Those have included installing low level signals ahead of the I-75 overpass bridge, adding flashing beacons before the bridge and placing back plates behind signal heads to make them stand out.

Burchell did not have actual crash numbers available for that intersection which she said has a long history of serious injury accidents.

In a roundabout, sideswipes are usually the worse type of accident but T-bones and head-on collisions are more typical in the area of concern.

National statistics show that roundabouts reduce crashes by 35 percent and serious injuries by 75 percent, she said.

The Bristol Road roundabout design is expected to include a slip ramp for GM plant workers to exit directly to the freeway, without entering Bristol Road, she said.

MDOT has discussed the impact of the roundabout installation with GM plant and Bishop Airport officials, Burchell said. Both are onboard and will be notified about road closure to coordinate access when installation begins.

Burchell said it is expected to take about one construction season, which usually runs from April to November, depending on the weather.

Also onboard is David Arceo, a member of the Genesee County Road Commission and former member of the Flint Township Road Advisory Committee.

The will require some patience and sacrifices as construction moves forward but the aim is to improve safety, he said.

“In the overall picture, I think it is going to be best for the community and the safety of our residents. That is what we are looking at. We do have the resources and are able to do this in a timely manner.”

This is believed to be Genesee County’s first roundabout. Previous plans for roundabouts were scrapped due to lack of funding and public protest.