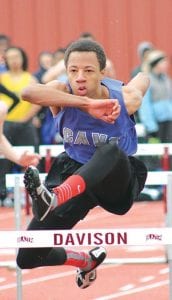 Andre Thornton clears a hurdle in a meet April 12 at Davison.

Carman-Ainsworth placed 11th with 470 strokes in the second Saginaw Valley League jamboree of the season Tuesday at Davison Country Club. Haywood Petty led the Cavaliers with a 95.

The Lady Cavaliers lost, 21-8, to Midland Dow on April 23. Carman- Ainsworth was to host Flint Powers Catholic on Tuesday, but the game was canceled due to poor field conditions. The game will not be rescheduled. — E.H.

The Cavaliers lost a non-league doubleheader to Holly, 18-5, 13-3, at home Tuesday. Jessica McClung went 5-for-6 and Jennie Klapko was 4-for-6. Brianna Haskins went 3-for-3 in the second game. Korbin Brandon had two hits and two RBI, and Madison Cox added two hits and one RBI.

Carman-Ainsworth lost a softball doubleheader to Mount Pleasant on Monday, 14-4, 15-0, at home. Klapko and Meghan Borgerding each had two hits, and Borgerding also drove in two runs.

The Cavaliers dropped a Saginaw Valley League-South Division twinbill at Flushing last Thursday, 14-2, 21-10. On a bitter cold evening, Borgerding had two hits in the first game. The nightcap was close until the seventh inning, when Flushing pulled away.

The Cavaliers will play another Valley doubleheader today at Flint Northwestern. — D.N.

For the boys, Cleandre Robinson won the discus, throwing 133-feet, 8-inches and John Jones won the shot put with a toss of 45-feet, 11-inches. Ja’Quin Jones took the top spot in the high jump at 6- feet, while Tyler Minor was victorious in the long jump at 21-feet, 3-inches.