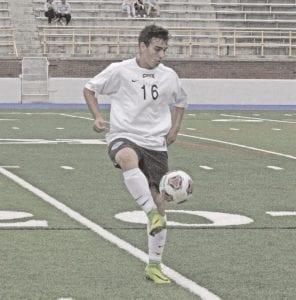 Carman-Ainsworth’s Farhan Mohamed shows off his footwork during Friday’s game at Atwood Stadium against Corunna.

Carman-Ainsworth fell to Holly in a close 2-1 loss Monday. Holly’s Ethan Postma scored first in the ninth minute of the game to take Holly up 1-0, but Carman-Ainsworth tied it 1-1 in the 30th minute. Holly then scored the final goal of the game with just seven minutes left. Keeper Brijesh Kumar had eight saves in net for the Cavaliers.

The Cavaliers opened up the season on Friday against Corunna at Atwood Stadium and came away with a 2-0 win. Wallace Hill struck first as he scored in the 20th minute on a penalty kick. In the second half, Hill added an insurance goal to seal the win with 12 minutes left on an assist from Omar Abdalla. Keeper Darwin Bostwick had two saves for Carman-Ainsworth.