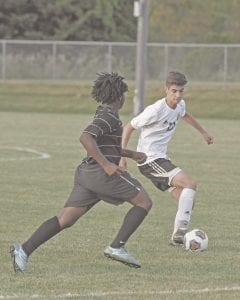 Carman-Ainsworth’s Jordyn Stearns (22) runs hard at the Flushing player at a game back in September.

The Carman-Ainsworth cross country team competed at the Great Flint Championship at the Cummings Center on Saturday, where the Cavalier boys were 19th with 572 out of 22 teams. Corunna was first with 50, Flint Powers second with 82 and Fenton third with 83. 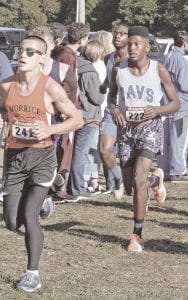 Carman-Ainsworth’s Joe Chinkeefatt runs at the Greater Flint Championship on Saturday at the Cummings Center.

The Carman-Ainsworth girls finished ninth with 284. Midland Dow was first with 45, Bay City Western second with 50 and Flint Powers third with 69.

Carman-Ainsworth is at the 30th Annual Heritage Invitational on Saturday. – K.R.

Carman-Ainsworth hosted Bay City Western on Monday and Arthur Hill last Wednesday. No stats or scores were reported prior to press deadlines.

The Cavaliers were at Lapeer last night and travel to Heritage on Monday. – K.R.