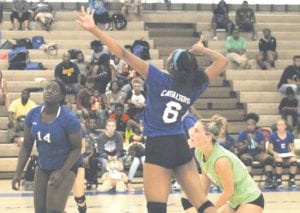 Carman-Ainsworth’s Diamond Lester (6) rises up for a spike, while Amaya Campbell, left, and Morgan Sherrer, right, look to make a play on September 12.

Carman-Ainsworth ran at the 30th Annual Heritage Invite on Saturday, where the boys placed 18 out of 24 teams. The Cavaliers accumulated 509 points. Saginaw Heritage was first with 54, Caro second with 66 and Alpena third with 83.

Carman-Ainsworth is at the Kayla O’Mara Invite at Goodrich on Saturday. – K.R.

Carman-Ainsworth fell to Saginaw Heritage 5-1 on Monday. Game details were not reported.

The Cavaliers traveled to Lapeer last Wednesday where they fell 4-2. Carman-Ainsworth struck first when Eli Young found the net on a helper from Ryan Farrar, but Lapeer took a 3-1 lead by halftime. In the second half, Jacob Yost cut the deficit to 3-2 when he scored assisted by Farrar, but it wouldn’t be enough to hold Lapeer back as the Lightning would score once more for the 4-2 final.

“Davison played really well and had us on our heels most of the match,” said Carman-Ainsworth coach Barb Hurand. “We need to work harder in practices to be better prepared for our competition.”