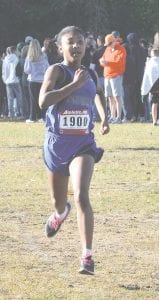 Carman-Ainsworth’s Mikaiah Holbrook heads towards the finish line at the Greater Flint Championship on Sept. 30.

The Cavaliers traveled to Goodrich on Saturday for the annual Kayla O’Mara Invite. The boys finished ninth out of nine teams in the large school race with 261. The Lady Cavs were 14th out of 14 teams with 382. Linden took first for the boys with 62, Grand Blanc second with 65 and Hartland third with 69. On the girls’ side, Flushing was first with 67, Linden second with 87 and Hartland third with 92.

Carman-Ainsworth was at the SVL Jamboree 3 hosted by Mt. Pleasant yesterday and will host the Bauman- Cavalier Classic Invite on Friday. – K.R. 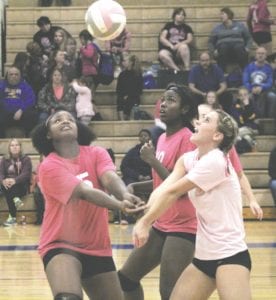 The Cavaliers closed out the regular season last Thursday with an 8-0 shutout loss to No. 3 Div. 3 ranked Flint Powers. Powers held a 6-0 lead at halftime and added another pair of goals in the second to end the game.

Carman-Ainsworth closed out the regular season at 5-12. – K.R.

“Mt. Pleasant was very tough for us,” said Carman-Ainsworth coach Barb Hurand. “They beat us pretty badly in game one and we gave them a fight in game two losing a close one. They took the wind out of our sails after that. They were just too strong for us and we could never get the momentum going.”

“We started out shaky tonight in game one to where Kearsley outhustled us and served tough,” said Barb Hurand after the match. “We played more aggressively the rest of the night. I was proud of how we turned it around and kept the momentum on our side.”