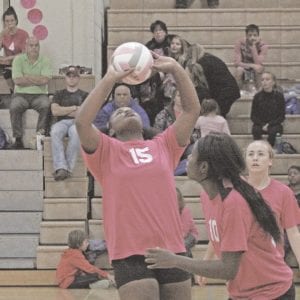 Carman-Ainsworth’s Aniya Harmon (15) sets the ball, as Destiny Johnson (10) and Katie Speaks anticipate the next hit on October 12.

The Cavaliers hosted the Bauman-Cavalier Classic on Friday, where the boys finished fourth out of four teams and the girls were third out of three. Ann Arbor Huron took first for the boys with 23, Lapeer was second with 64, Swartz Creek third with 74 and Carman-Ainsworth had 87. Swartz Creek girls took first with 21, Lapeer second with 47 and Carman-Ainsworth had 55 points.

Carman-Ainsworth is at the Div. 1 regional meet at Delta College on Saturday. – K.R.

“We played hard tonight, but we didn’t do a good job of controlling our side of the court in terms of what we sent over to Powers,” said Carman-Ainsworth coach Barb Hurand. “We had too many missed serves and hitting errors tonight. Powers took advantage of that and outplayed us.”

Over the course of the tournament, Sherrer had 24 digs and Speaks added 20 digs. Diamond Lester had 16 kills, Destiny Johnson had 10 kills and Amaya Campbell had nine kills. Angel Eubanks had a team-high 11 blocks.

“We were disappointed not to have won a match on Saturday,” said Hurand. “We have to keep plugging away and start believing we can play with anyone if we play the way we know how. I’m confident that my team will make some noise and get it going.”