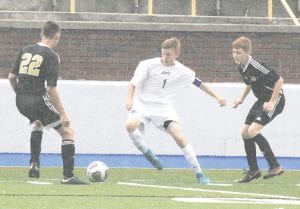 Carman-Ainsworth’s Eli Young looks to escape a pair of Corunna opponents during the season opener on Aug. 17. Photo by Brandon Pope

The Lady Cavs competed in a Saginaw Valley League 9-hole meet at Davison Country Club Tuesday, finishing with a team-total 269.

Payton Dixon led Carman-Ainsworth with a 61 and was followed by Jamie Arnold, who carded a 63. Michaela Hitchcock finished with a 69 and Serenity Cooper added a 76.

On Monday, the team traveled to Flint Golf Club for the Flint Powers Invitational. Only two girls finished out their rounds, as Dixon carded a 111 and Arnold added a 137. Hitchcock also competed, but she had to withdraw due to the heat.

Last Wednesday, Carman-Ainsworth was at the Saginaw Valley League’s preseason tournament, but was unable to post a final score because only two golfers competed on the day. Flint Powers Catholic placed first with a 341, Grand Blanc was second with a 357 and Midland Dow was third with a 370.

Carman-Ainsworth is at a Saginaw Valley League tournament next Thursday at Flushing Valley. – A.V.

Carman-Ainsworth improved to 4-0 on Monday after the Cavaliers defeated Owosso 2-0. Both goals came from Wallace Hill.

Carman-Ainsworth defeated Bay City John Glenn 2-1 last Wednesday. John Glenn grabbed a 1-0 lead in the first half, but the Cavaliers found the net twice in the second to steal the win. Keenan Shukairy and Hill had a goal each.

Carman-Ainsworth was at Clio on Wednesday and is at Bay City Central next Wednesday. – K.R.