The offense was in full gear on Monday when Carman-Ainsworth took Flint Soutwestern to task in a Saginaw Valley League doubleheader, 15-0 and 16-0. With both contests ending as three-inning mercies, it was Alfonso Foster who earned the win in the initial game after giving up no hits with six strikeouts and two walks. Noah Reed then did the same in the nightcap by giving up no walks and striking out five.

At the plate, the story for Carman- Ainsworth was Justin Hubbard with three doubles, one single and five RBI on the night, Connor Storms came through with four singles and a double and charting two RBI and a double each were Entrice Mitchell, Ethan Lambitz and Brennan Gleason.

“It was good to see us hit better on Monday,” said coach Tom Miller. “We had been in a hitting funk last week. Hopefully, it will help give us confidence (today) verse Davison.”

All this came after the squad lost two at the Mt. Morris tournament last weekend to Lapeer East, 12-0, and Southfield Lathrup, 8-4. Hubbard once again led the charge for Carman- Ainsworth, 10-13 overall, with a double and a single and posting a hit and two RBI was Sherdian Cox. — M.S. 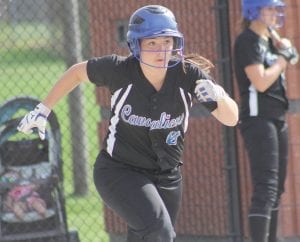 Meghan Borgerding heads for first base after a hit in a May 2 game.

The Lady Cavs posted an 8-0 shutout over Flint Southwestern Academy on Monday.

Rachel Roop was hardly challenged, only having to make one save. Shelby Marsh again led the scoring charge with five goals and one assist. Single goals were toed in by Emily Johnson, Jordan Marsh, Holley Taylor and Diamond Bailey.

The Cavs dropped a non-league doubleheader at Clio on Tuesday, 15-0 and 13-3.

Carman-Ainsworth was coming off a sweep of its own the previous day, routing Flint Southwestern, 12-2 and 18-4, in a Saginaw Valley League twinbill at home. Brianna Haskins had three hits and three RBI, and Meghan Borgerding drove in two runs with three hits. Jessica Smith, Jennie Klapko, Jessica McClung and Korbin Brandin also had hits for the Cavs, while McClung struck out nine for the pitching victory.

McClung ripped five hits in the nightcap, while Madison Cox added a hit and an RBI and struck out nine for the win. Haskins also had another hit.

The Cavs dropped a Valley twinbill to Powers Catholic, 5-4 and 12-2, on May 8 at home. McClung had two doubles, a single and three RBI in the opener, while Borgerding singled in the other run. Klapko also had a hit. McClung added another hit and an RBI in the nightcap.

“Carman won all four singles matches in straight sets and two doubles,” said coach Bob Chunn. “The most interesting match was at two doubles. Carman palyers Sarah Hyde and Whitney Reynolds won in three sets, losing in the first set, 1-6, then winning the next two sets in tie breakers, 7-6 and 7-6.”

Freshman J’Lynn Corder was on top of her game at the Saginaw Valley League tournament last Thursday, coming out as the runner up in the No. 1 Singles bracket. Corder was not beaten until falling to Midland Dow’s Kamryn Matthews, 6-2, 6-0, in the championship match. As a team, the Cavaliers placed seventh in the tournament.

The Cavaliers are at regional No. 8- 1 at Saginaw Heritage today. — B.P.

The Cavaliers were at the Davison Twilight Classic on Friday and posted some top-notch finishes along the way on both the boys’ and girls’ side. For the boys, Demarion Allen was third in the 200-meters in 23.61 and Tyler Pangerl placed second in the 1600- meters in 4:47.39.