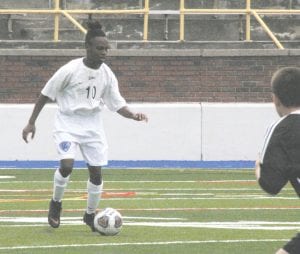 Carman-Ainsworth’s Alex Williams looks down the field against Corunna on Aug. 17. Photo by Brandon Pope

Payton Dixon led the Lady Cavs with a 106 during the Saginaw Valley League championship tournament at the Fortress last Wednesday.

Carman-Ainsworth finished with a team-total 517, while Flint Powers took first with a 346, Davison second with 362 and Grand Blanc third with 372.

Jamie Arnold added a 132 for the Lady Cavs, followed by a 137 from Serenity Cooper and a 142 from Michaela Hitchcock. – A.V.

The Cavaliers were handed a 3-1 loss against Flint Powers on Monday. Individual stats were not reported.