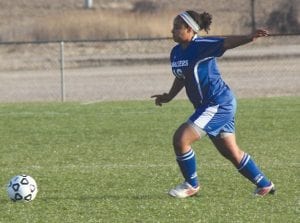 Carman-Ainsworth’s Selena Johnson puts the ball back in play.

In a Saginaw Valley League home doubleheader last Thursday, Carman- Ainsworth was swept by Davison, 10-1 and 7-0. The difference for the Cardinals turned out to be University of Michigan commit Maverick Prine, who gave up just one hit to Noah Reed in the seventh inning of the first game while striking out 11 and walking three. Prine managed a two-run homerun and a double for the contest, as well.

“Davison’s pitching was very good. They just shut us down,” said Carman- Ainsworth coach Tom Miller. “Also, Prine just controlled the game at the plate and on the mound. He played a great game. We had to walk him twice. He had four hits on the day and six RBI.”

“I am proud of the kids for taking third place in the Saginaw Valley,” Miller said. “We had a chance the last day to be Valley champs but Davison was just better than us and earned their championship.” — M.S.

The Lady Cavaliers tied, 1-1, with Lapeer East in a rescheduled game from March Tuesday. Shelby Marsh booted in Carman-Ainsworth’s lone goal in the first half and Alexis Whatcot scored for East, also in the first half. Carman was playing shorthanded as two players had Chorale commitments and another was in a commencement ceremony, getting the pass on the night from coach Mathews.

Davison shut out the Lady Cavs last Wednesday, 8-0, after putting up five goals in the first half, and tacked on three more in the second. Rachel Roop had 12 saves in goal for the Cavaliers. — L.P.

The Cavaliers went 1-2 at the LakeVille Invitational last Saturday, losing to the host Falcons, 12-0, and Powers Catholic, 10-3, and beating Mayville, 8-6. Jessica McClung, Alanna Gleason and Samantha Johnston had hits against LakeVille. Korbin Brandon had three hits against Powers, while Meghan Borgerding, Brianna Haskins and Sarah Tilley each had a hit and a RBI. Jennie Klapko and Jessica Smith added hits. Gleason had three hits and two RBI in the win over Mayville. McClung had two hits, Klapko tripled and drove in a run, and Haskins and Sarah Thurston added a hit and a RBI each. Madison Cox had one hit.

Carman-Ainsworth lost a tough game to Davison, 11-10, in the opener of a Saginaw Valley League doubleheader last Thursday. The host Cardinals also won the nightcap, 10-2. Smith and Borgerding each had three hits and two RBI in the first game, and Haskins had two hits and two RBI. McClung had two hits and a RBI, and Cox one hit and one RBI. McClung had two more hits in the nightcap.