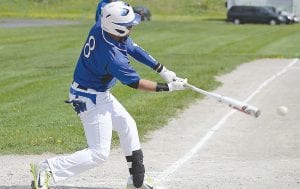 In what was slated to be a non-conference twinbill, Carman-Ainsworth defeated Lapeer West, 7- 2, in five innings because of rain last Wednesday. Earning the decision was Noah Reed with one hit and four walks allowed with five strikeouts. At the plate for Carman-Ainsworth, Brennan Gleason had two hits, Entrice Mitchell added a double and two RBI and posting a hit each were Vincent Lang, Connor Storms and Alex Thompson. Brandon Bobcean also proved key with a three- RBI double in the fourth to put the Cavs up, 4-2. — M.S.

Carman-Ainsworth warmed up for this week’s district tournament by finishing 10th in the Wolves Invitational on May 22 at Bay County Golf Club. Haywood Petty led the Cavs with an 88. Alex Frank shot 120, Brad Woolard 127 and Kyle Fluker 128, as Carman-Ainsworth totaled 463. Traverse City Central won with 325, two strokes better than Davison.

All those teams will return to Bay County Golf Club tomorrow for a Div. 1 district meet. — D.N.