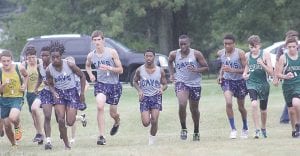 The Cavaliers placed two boys in the top seven at the annual Kearsley Invitational on Tuesday and the very small and inexperienced girls’ squad took their first baby steps in a new sport.

Tyler Pangrl was fourth in 18:20 and James Johnson was seventh in 18:37 as the boys’ squad places sixth out of eight teams. Davison won the boys’ race and Fenton was runner up. Ahmir Dunn posted a 21:53 and Aaron Sedrick a 24:30, pretty good for a freshman.

“We did reasonably well and will be back at the drawing board first thing at 9 a.m. Wednesday preparing for our own meet on Thursday,” said boys’ coach Kenn Domerese.

Coach David Thrash had to talk his first-time runner off the ledge so to speak as the heat, humidity and daunting length of the race got the better of her. Italy Daniels pulled up around the one-mile mark and did not finish the race. The three-year track sprinter is trying cross country for the first time and the race surprised her on many levels. Several other girls, also track athletes have to still complete physicals to be eligible but attended to see what their first race might look like. 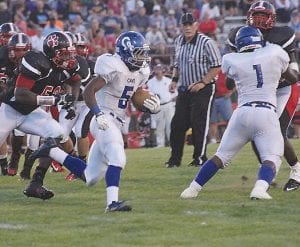 Lorenzo Redmond (5) and the Cavaliers will renew acquaintances with Grand Blanc tonight.

“Italy was pretty nervous for her first race and the hot muggy conditions and no experience set her back a little,” said girls’ coach David Thrash. “We got her cooled off and hydrated and she thinks she’ll be able to do what she needs to in order to finish the race on Thursday when we host our own invitational. She did okay today in her first race, but felt bad that she pulled up. I was okay with that given the situation and I think she’ll do okay as we move forward.”

The other two track athletes, Lauren Riley and Raven McCloud, were a bit taken aback, but told Thrash they think they can go give it a go once they are cleared to compete.” — L.P.

The Cavs open their season tonight with a home game against Grand Blanc, a team they met twice last year. Carman- Ainsworth beat the Bobcats in the season opener, 27-12, but lost a first-round playoff game to them, 30-26.

The Cavs want to go much deeper in the postseason, and playing non-league teams like Grand Blanc help prepare them for that.

“I feel every week we’ll be preparing for the playoffs because we’re playing playoff teams,” said Carman-Ainsworth coach Nate Williams. “So, hopefully, by week 10, we’re ready for that long haul.”

The Cavs graduated star running back Gerald Holmes last year, but returned just about everybody else and are a top contender in the Saginaw Valley League- South.

Carman-Ainsworth will visit Saginaw Heritage next Friday, Sept. 6, to take on the Hawks and junior Brian Cole, one of the top-ranked players in the nation at cornerback. — D.N.

The Cavs dropped a non-league game at Swartz Creek on Monday, 4-1. Leon Bell scored with two minutes left in the first half, but Creek already had a 2-0 lead at that point and sealed it with two more goals in the second half. Andrew Ramirez had six saves for Carman-Ainsworth.

The Cavs went 1-2 at the Saginaw Heritage tournament last Saturday, beating Corunna, 1-0, and losing to Heritage and Utica Eisenhower by 4-0 scores. Andrew Ramirez had 17 saves on the day in goal, while Tyler Springer made 12 stops. Ben DuPree scored the goal, on an assist from Ahmad Al-Zhabi.

Carman-Ainsworth/Flushing was at home Tuesday against Kearsley/Clio in a non-conference contest that it ended up losing, 86-100. The difference for the Lady Hornets was taking first place in all but two events. The Lady Cavs’ victories included diving and the 200 free relay. — M.S.