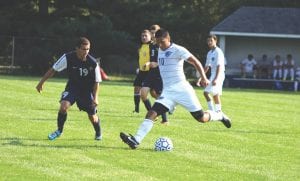 FLINT — The Cavaliers lost a close game to Owosso, 2-1, in a non-league matchup Monday at home. Leon Bell scored for Carman-Ainsworth off an assist from Austin Yost to create a 1-1 tie at halftime. Andrew Ramirez kept it close with 13 saves in goal, but the visiting Trojans eked out the deciding goal in the second half.

Carman-Ainsworth fell to Lapeer West, 3-0, last Thursday at home. Ramirez had three saves, while the Cavs had three shots on goal.

The Cavs bowed to Midland, 2-0, in a Saginaw Valley League game Sept. 4 at Midland. The game was scoreless at halftime. Ramirez had four saves.

Carman-Ainsworth will visit Flushing in another Valley game Monday. — D.N.

At the 16-team Fenton Relays last Saturday, Hartland was first and Carman-Ainsworth/Flushing placed 12th with a score of 144. Medaling for the Cavs was the 4×100 IM relay team of Kayla Seeley, Rebecca Hrit, McKenzie Bartlett and Emily Stemczynski in the seventh spot in 4:59.45, the butterfly relay unit of Selena Adams, Hrit, Seeley and Bartlett were sixth in 2:10.89 and coming in seventh was the diving relay squad of Taylor Wheaton and Jennifer Messina. 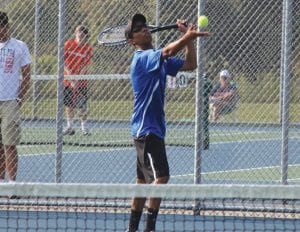 “They’re working really hard, both in the pool and on dry land. We implemented a weight lifting program and the girls are seeing great results,” said head coach Kevin McGlashen. “Just about every girl had a personal-best time. That’s huge. We’re a young team. We have a lot of sophomors and a couple of freshmen, biut we’re already seeing significant drops in their times.”

Carman-Ainsworth/Flushing and Midland are at Bay City Western today. — M.S.

The Cavaliers dropped their match to Clio, 6-2, Monday.

Clio’s Stu Coffey/Brandon Davis beat Kyle Fluker/Vlad Li, 6-2, 6-1, at No. 1 Doubles. The Mustangs’ Jeremy Dinnan/Jaedon Ford beat Lule Moore/Ethan Moore, 6-2, 6-2, at No. 2. Clio made it a clean sweep in Doubles by taking the final two matches.