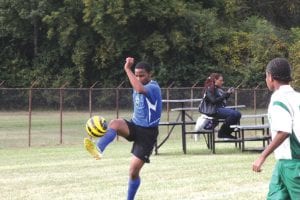 The Cavaliers routed Flint Northwestern, 8-0, in a Saginaw Valley League game Monday at Northwestern. Eight different players scored goals, all in the first half, as Carman-Ainsworth completed the mercy-rule victory by halftime. Terance Green led the offense with a goal and three assists, and Ahmad Al-Zahabi had a goal and one assist. Stephan Clark, Stephon Gatica, Anas Morsi, Leon Bell, David Rawls and Ben DuPree also scored goals, while Andrew Ramirez, Tyler Springer and Zach Smith added assists. Austin Yost needed no saves to get the shutout in goal. 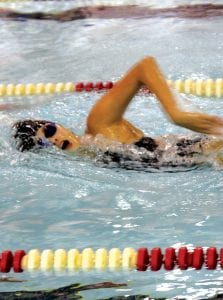 Selena Adams works her way across the pool for the Carman-Ainsworth/Flushing varsity swim and dive team.

On Sept. 18, the Cavs traveled to Mount Pleasant for a Saginaw Valley League crossover game and fell, 5-2. Carman-Ainsworth trailed, 2-0, at halftime, but battled back in the second half on goals by Al-Zahabi and Morsi. Mount Pleasant, however, kept the pressure on and scored three second-half goals to pull away. Andrew Ramirez was busy in the Cavs’ goal with eight saves.

In a non-conference road matchup on Tuesday, Carman-Ainsworth/Flushing was dominant in taking a 94-79 win at Holly. Placing first in the 200 medley relay were McKenzie Brtlett, Emily Stemczynski, Rebecca Hrit and Selena Adams in 2:11.23, in the 200 free the Lady Cavs grabbed the top spots as Kayla Seeley finished in 2:19 and Rebecca Bates touched the wall in 2:25. In the 200 IM, Bartlett was first in 2:43 and Hrit was second in 2:48. In the 50 free, Stemcynski was the winner for Carman-Ainsworth in 27.07 and Jennifer Messina and Ashley Jones tied for second in 31.61 and Messina was also victorious in the diving with a score of 155.73, Kassidy Lord was second with 151.85 and Taylor Wheaton had 148.45 points to take third.

“It was really nice to get a win tonight. This kind of was a tune-up meet for Genesee County. We’ll definitely be working this week to prepare for that,” said coach Kevin McGlashen.

The Lady Cavs also lost at home on Sept. 19 to Midland Dow and next compete at the Genesee County Meet today, tomorrow and Saturday at Fenton.

“We’ll probably be in the middle of the pack. I don’t know that we’ll get enough kids in to move up really high. Plus, there are some excellent girls teams like Brandon, Grand Blanc and Fenton that are all going to place high,” McGlashen said. “Kearsley is also pretty good this year, so they may be fighting with Powers up top.” — M.S.