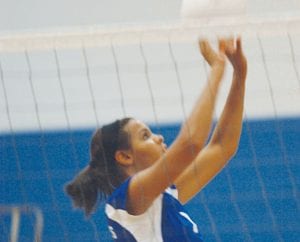 Kamrin Gold sets the ball for Carman-Ainsworth against Lapeer West.

Carman-Ainsworth played Lapeer West in its home opener Tuesday night, and the Lady Cavaliers presented coach Barb Hurand with a bouquet of flowers in celebration of her 20th year coaching the program.

Carman is 0-7-1 on the season but Hurand knows the team is better than the record.

“We really are a good team we just haven’t found a way to be consistent this year,” she said. “We serve, receive and block real well, but we hit too many balls out of bounds.” The Lady Cavs travel to the New Lothrop tournament today.