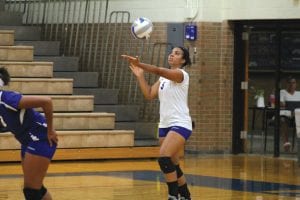 Tori Henderson (5) on serve for the Carman-Ainsworth varsity volleyball squad.

The Lady Cavaliers took part in the Saginaw Valley League North-South Crossover #3 on Monday, hosted by Flint Powers Catholic, and finished in fourth place iwth 227. Powers won the whole thing with 186, Mt. Pleasant took second with 202 and Saginaw Heritage was fourth with 212.

Meghan Borgerding led the Lady Cavs, carding a 42 and Mikaila Garrison shot her way to a 57. Taylor Jarnigin came through with a 61 while Alanna Gleason capped off the day with a 67.

The Cavaliers were back in action following our Wednesday deadline, traveling to the SVL post-season tournament. — B.P.

The Cavaliers scored a tight victory over Saginaw Nouvel last Friday, edging the Panthers, 1-0, at Carman- Ainsworth. Tyler Springer scored a firsthalf goal on an assist from Ahmad Al- Zahabi, and Andrew Ramirez made it stand up with 12 saves in goal. The Cavs put nine shots on Nouvel goalie Matt Gembrowski. 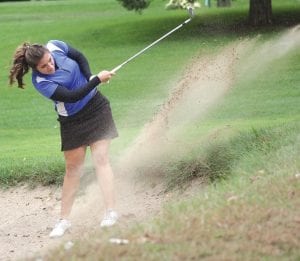 Carman-Ainsworth’s Meghan Borgerding chips out of the sand.

Carman-Ainsworth was coming off a 5-1 loss to Flint Powers Catholic in a Saginaw Valley League-South Division game Sept. 25 at home. The Cavs trailed, just 1-0, at halftime, but Powers put four more in the net in the second half. Ramirez had 11 saves.

Carman-Ainsworth will visit Goodrich in a non-league game next Monday. — D.N.

The Cavaliers dropped an 8-0 decision to Flushing Friday.

Kayla Tigner had 38 assists, Breanna Hudson chipped in 12 kills and five blocks and Jessica McClung had 12 kills and 15 digs. Jessica Smith and Alexus Colby had eight kills and 17 digs each, Deja Lester added four kills and four blocks and Megan Speaks had 11 digs for the Cavaliers.

“The match was a very good match,” Cavaliers coach Barb Hurand said. “I thought we played really well all night, even in game three.

“Byron made some big defensive plays to win that game. I liked my team’s ability to shake off mistakes and move forward all night long. We are definitely improving our all-around game each time we play.” — K.W.