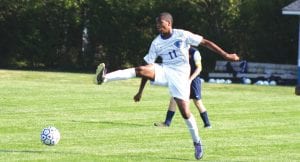 Carman-Ainsworth’s Leon Bell gets a leg up on the ball.

Bringing the regular season to its conclusion on Monday, the Cavaliers hosted Brandon for their final dual of the year, narrowly falling to the Lady Blackhawks, 208-216. Meghan Borgerding sat atop the overall scorecard, shooting her way to a 42 while Mikaila Garrison finished the day with a 52. Taylor Jarnigin recorded a 60 and Madison Cox posted a 62.

In the final Saginaw Valley League Jamboree of the season, the Carman- Ainsworth girls’ golf team traveled to The Fortress Golf Club in Frankenmuth to meet up with the rest of their conference foes, placing ninth overall with a 442. Midland Dow came in first with a 336, Davison was second with a 344 and Flint Powers Catholic took third with a 360.

Leading the way for the Cavs was Borgerding, performing as she has all year firing an 87. Garrison carded a 103, Alanna Gleason picked up a 125 and Jarnigin recorded a 127.

With the regular season at its end, the Lady Cavs traveled to Port Huron Golf Club following our Wednesday deadline to compete in Port Huron Northern’s regional 5-1. — B.P.

The Cavaliers fell behind Goodrich, 4-0, in the first half and eventually dropped a 5-1 decision to the Martians in a non-league game Monday at Goodrich. Terance Green scored Carman-Ainsworth’s goal on an assist from Ahmad Al-Zahabi in the second half. Andrew Ramirez had eight saves in goal.

The Cavs came back from a two-goal halftime deficit to tie Davison, 2-2, in a Saginaw Valley League-South Division game Oct. 2 at home. Al-Zahabi pulled Carman-Ainsworth within 2-1 eight minutes into the second half, and Leon Bell scored the equalizer on an assist from Green with 10 minutes left. Ramirez had 10 saves, while the Cavs put seven shots on the Davison goal.

Carman-Ainsworth will host Linden in a non-league game today. — D.N.

“It was good. We had some personal bests tonight,” said coach Kevin McGlashen. “We (also) had some girls swimming some (events) they haven’t swam in awhile.”

“Every girl had a personal best that night and some had two or three. They really swam hard to try and beat Davison,” McGlashen said.

Carman-Ainsworth/Flushing is at Saginaw Heritage today for a SVL crossover contest. — M.S.

The Cavaliers finished in ninth place at the Saginaw Valley League tournament Thursday.

“It was a hard-fought win for sure,” Cavaliers’ coach Brab Hurand said. “I was proud of my team’s effort all night.

“Midland is a great team, and I thought we did a great job against them tonight as a team.”

The Cavaliers went 1-2 at the Saline Invitational Saturday.

“I thought we had some good spurts of play but we lacked consistency,” Hurand said. “We had some tough serves, but missed a ton of serves. I was hoping to see us start and finish strong.” — K.W.