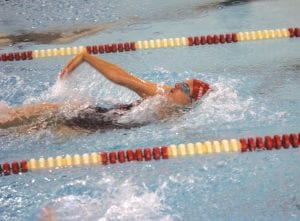 The Cavaliers competed at the Saginaw Valley League meet yesterday after deadline.

Bailey Curtis was the lone girl runner for Carman-Ainsworth, placing 55th in 28:50.01.

In Saginaw Valley League tri-meet at home on Tuesday, Carman-Ainsworth lost to Powers 119-64 and defeated Bay City Central 104-82. Leading the Lady Cavs for this event was Rebecca Bade with several personal-bests, including performances of 2:16.61 in the 200 free and 6:17.13 in the 500 free. McKenzie Bartlett also clocked a personal best time for Carman-Ainsworth/Flushing of 2:38.79 in the 200 IM, in the 100 free first-year swimmer/junior Madison Rochan took two seconds off of her personal best in 1:18.24 and Allison Castles had a personal best of 1:26.46 in the 100 back. Nadine Dabish took 17 seconds off of her personal best for the Lady Cavs in the 100 back in 1:50.81, as well.

“It was a good meet. We swam pretty well and had some good races,” said coach Kevin McGlashen.

“They beat us pretty good. We weren’t at our best that night,” McGlashen said. “There were a couple little mistakes in the meet as far as placement and I think the girls got confused on some things. They did diving first. Nothing against Heritage. I’m not trying to make excuses. The meet ran a little different and they weren’t used to it and it kind of threw them off a little bit.”

The Lady Cavaliers and Flint Southewestern have a SVL meet at Saginaw Arthur Hill today. — M.S.

Sarah Thurston had 32 assists and 14 digs for the Cavaliers. Jessica Smith chipped in three aces, 16 kills, four blocks and 19 digs.