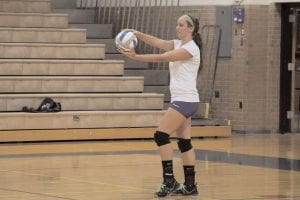 Carman-Ainsworth’s Jessica Smith gets ready to serve during a match against Durand at Kearsley earlier this season.

The Cavaliers hosted the Cavalier Classic last Friday with complete results still not posted to athletic.net as we went to press Wednesday morning.

Tyler Pangerl made the top 10, placing in 10th place at the Saginaw Valley South Championships last Wednesday at the Cummings Center. He finished the race in 16:29.55, leading the boys’ squad as he has all season. Carman- Ainsworth finished seventh overall with 227 points with Saginaw Heritage winning the meet with 37. Davison was second with 69, Flushing third with 80 and Midland fourth with 90. Auburn Bay City Western was fifth with 107, Midland Dow sixth with 147, Mt. Pleasant eighth with 231, Flint Powers ninth with 232, Flint Northwestern 10th with 322 and Flint Southwestern Academy 11th with 348.

Because Saginaw Arthur Hill did not field a team this season, the Saginaw Valley League tri-meet scheduled for Oct. 17 ended up becoming a SVLSouth dual meet at Flint Southwestern Academy that featured a victory by Carman-Ainsworth/Flushing. The Lady Cavs will be at Saginaw Valley State University on Nov. 7 to compete in the SVL Finals. — M.S.