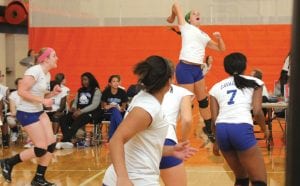 The Cavaliers went 2-3 in five matches at the Fenton Tournament Saturday.

“We had a tough day which was a bit disappointing,” Cavaliers’ coach Barb Hurand said. “Everyone was tough for us on the day because we were not meshing as a team.

“We did some good things, but lacked consistency and enthusiasm the whole day.” — K.W.