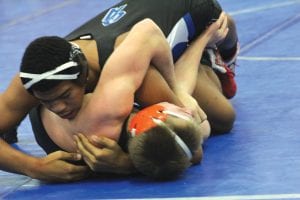 Jerron Thomas was one of six Cavaliers to go 5-0 in the Owosso Invitational last Saturday.

HOCKEY The Raiders welcomed the Eastside Stars, a coop squad with Haslett as the primary school last Saturday. Flushing played probably its strongest game of the year, however, was unable to get past Eastside in a 9-6 loss.

Flushing/Carman-Ainsworth held a 4-3 advantage following the first period until Eastside went on a 3-0 run in the middle frame before outpacing the Raiders, 3-2, in the final stanza.

Wes Livingston led the scoring for the Raiders, recording a hat trick while adding an assist and Joe Montpas picked up a goal and two helpers. Austin Phillips and Trevor Sauve each scored a goal, Gavin Williams had two assists and Jon Nelson assisted one goal.

Flushing/Carman-Ainsworth faced a daunting task last Wednesday against a tough Lapeer squad, falling in a mercy-rule ending at the Polar Palace, 8- 0.

The Raiders got 11 shots on goal, however, Cody Freigruber stopped every one of them. Lapeer scored twice in the first period before pouring on six goals in the second.

Lapeer’s Matt Daniels, Jacob Morrell and Nick McCormack each had two goals while McCormack had an assist. Matt Hunyady had a goal and an assist, Cody Kingsbury scored a goal and Joe Daniels and Mark Leiman each picked up two assists.

The Carman-Ainsworth boys’ swim team took to the waters at Fenton on Saturday for the Fenton relays, finishing sixth overall with 268. Ann Arbor Skyline won the meet with 398, Novi was second with 396 and Haslett took third with 310. Howell placed fourth with 310 and Flint Powers Catholic finished fifth with 270.

“We finished sixth out of 13 teams,” said coach Kevin McGlashen. “All of the relays medaled. No one finished any higher than sixth. We swam out of our minds. They swam better than I thought we would. They swam where I thought they could but I didn’t think they would swim that fast.”

The Cavaliers face off with Bay City Western and Midland on Friday. — B.P.

The Cavaliers opened their season last Saturday by winning the Owosso Invitational. Carman- Ainsworth totaled 246 points to beat Davison’s 226 and Lake Orion’s 213. Owosso was fourth with 179, Napoleon fifth with 171 and Bath sixth with 105.

Carman-Ainsworth opened Saginaw Valley League competition last night with a double dual at Flint Northwestern against the host Wildcats and Southwestern Academy. The Cavs will host a Frosh/Soph Invitational on Saturday. — D.N.