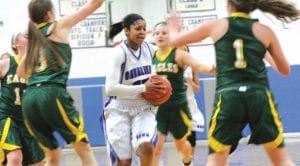 The Lady Cavs’ title hopes in the Saginaw Valley League-South Division took a big hit last Thursday when they lost a home game to Flint Powers Catholic, 72-51. The visiting Chargers surged out to a 20-7 first-quarter lead and Carman-Ainsworth was forced to play catch-up the rest of the night. The Cavs rallied with an 18-15 second quarter to creep within 35-25 by halftime, but Powers pulled away with an 18-14 third quarter and a 19-14 fourth.

A trip to Saginaw Valley State University last Saturday pitted the Carman-Ainsworth varsity basketball team against Southfield-Lathrup. While the Cavs did manage to grab leads of 16-11 and 30-28 at the end of the first and second quarters, they were then outscored, 14-9 in the third, and, 20-13 in the fourth, en route to a 62-52 defeat.

Ja’Quin Jones still managed to shine for Carman-Ainsworth with 14 points, 10 rebounds, two assists and one steal, Justice Green scored 16 with four boards two steals and an assist and Jarell Giles gave an eight-point performance. Simeon Kemp also found a way to get noticed for the Cavs with seven points and three rebounds.

Carman-Ainsworth’s fourth game of the season came on Dec. 19 when it hosted Powers for a Saginaw Valley League-South contest and won, 58-39. The Cavs were in charge from the start in this one and claimed a 13-6 lead in the first quarter before outscoring the Chargers 12-9 in the second to go up 25-15 heading into the break. Carman- Ainsworth also posted a 33-24 scoring advantage in the fourth.

Green proved to be the story for the Cavs in this one with 28 points, five steals and three rebounds, Jaylen Bradley came through to the tune of 15 points, six rebounds, four steals and one assist and Jarell Giles added five points, three assists and three steals. Demarion Allen also made his way into the spotlight for Carman-Ainsworth with four points, three assists, two steals and one block, Simeon Kemp had two points, four steals and an assist and Brandon Walker pulled down two points, five rebounds one assist and a steal. Connor Storms put up two points for the Cavs, as well.

Carman-Ainsworth bowled in its first Saginaw Valley Conference match last Friday in Essexville, bowling against Flushing. The boys’ squad rolled Baker games of 235 and 239 and won, 28-2, lead by Jordan Nunn’s 256-267 and Jordan Bair’s 213-215. Coach Lorita Simon said the girls scores weren’t quite as impressive, but good enough for them to win, 29-1, led by Kenzey Lord’s 182-199. On December 14, the boys’ team placed third during the qualifying round in the Bangor John Glenn Holiday Tournament with a total team of 4,011 for three regular team games and five Baker games. Dequincy Adams made the All-Tournament Team with a three-game series of 666. In the Birch Run Panther Classic held at Candlelite Bowl in Saginaw on December 15, the boys’ team placed second during qualifying with a team Baker score of 2,492 for 12 Baker games. —L.P.

Friday’s meet against Midland Dow was canceled due to severe weather. The Cavs will return Jan. 7 at Brandon. — B.P.