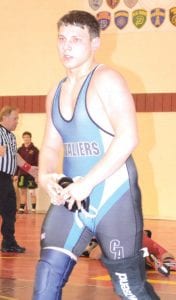 Carman-Ainsworth’s Herbie Keskes is currently ranked ninth in the state at 171 lbs. after placing fourth last weekend at the New Lothrop tournament.

Carman-Ainworth boys’ and girls’ bowling teams bowled against Mt. Pleasant last Saturday and after going down 6-4 after the two Baker games, the girls bounced back. Coach Lorita Simon says they fought until the 10th frame of the first game with one last chance to win. After the Oilers’ last bowler missed her spare, the game was in the hands of anchor bowler and Carman-Ainsworth senior Shamonica Simon. In order to tie the game, she needed to get 28 of the possible 30 points.

On the boys’ side, after going ahead, 10-0, after the Baker games, they found themselves tied, 15-15, after the two regular games. A deciding Baker game was bowled with the Cavs winning by a 159-152 margin to win the match.

Both Carman-Ainsworth teams took their 2-0 records to Grand Blanc Lanes on Wednesday after press deadline against City rival Flint Powers, followed by a bye at 11 a.m. on Saturday before taking on Bay City Central at 2:45 p.m. Saturday. The boys are at Roll-a-Way and the girls at B’s Bowling. — L.P.

The Cavaliers had three wrestlers place in the rugged New Lothrop Invitational last Saturday. Milik Dawkins finished second at 145 pounds, losing to St. Johns’ Mark Bozzo, 1-0, in what was arguably the best match of the tournament. Dawkins came in ranked seventh and Bozzo was 13th in michigangrappler.com’s Power 15, which ranks the state’s top 15 in each weight class regardless of division.

Herbie Keskes, ranked ninth in Div. 1, was fourth at 171, and Demetric Hall placed fifth at 103 for the Cavs. Darien Vaughn fell short of placing at 130, which had 12 state qualifiers in the field, and Jerron Thomas also didn’t place at 215.

Carman-Ainsworth will wrestle in the Warren Woods-Tower Invitational this Saturday. — D.N.