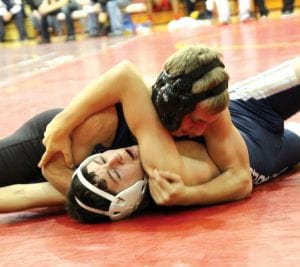 The Cavaliers’ boys’ team placed third at the Kearsley Invitational on Sunday, losing to Marysville in the semifinal, 433-447 in a two-game Baker total. The Cavaliers finished in seventh place during qualifying with a total score of 3,107 for three regular games in which only the top eight teams advanced to match play. During match play, the Cavaliers came on strong and led the match play round with a score of 1,560 for seven Baker games to advance to the final four. In the final four round, Carman- Ainsworth was second to Swartz Creek by only five pins. Jordan Nunn led the All-Tournament team rolling games of 259, 218, 268 for a 745 series, which only consisted of the top five boys’ series of the tournament.

The girls continued their quest for a winning season (6-0) with a win over Flint Southwestern Academy last Wednesday at Grand Blanc Lanes. The girls were consistent in their Baker games, bowling 188 and 189, and followed up with games of 954 and 915, led by seniors Kenzey Lord with 210- 233 and Shamonica Simon with games of 200-213. Freshman Caity Cox rolled 192, sophomore Yakira Hughes a 189 and junior Bernardette Gruber rolled games of 181,179.

Carman-Ainsworth also competed in the Flint Metro Open Invitational at Richfield Lanes. The girls made it through the opening round with games of 1,012-900-855, led by Kassidy Lord’s 229-213-180-622, Shamonica Simon rolled 239-218-176-633, Kenzey Lord a 191-217, and Yakira Hughes 192. After making the top eight, they were eliminated after bowling seven Baker games against the remaining qualifiers.

The Cavaliers were at Grand Blanc Lanes on Wednesday to face Flint Powers. – L.P.

The Cavaliers finished seventh at the Mooney Classic last Saturday at Williamston. Demetric Hall won a championship at 103 pounds, and Jerron Thomas took the title at 215.

Carman-Ainsworth will compete in the Allen Park tournament this Saturday. — D.N.